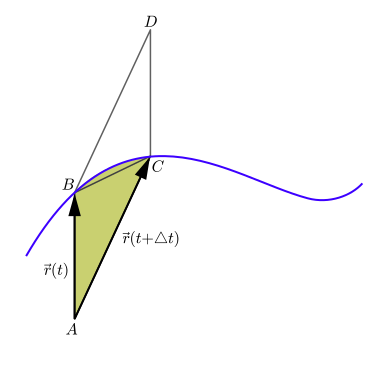 Areal velocity is the area swept out per unit time by the position vector of a particle moving along a curve da/dt=const (shown in blue).

In classical mechanics, areal velocity (also called sector velocity or sectorial velocity) is a pseudovector whose length equals the rate of change at which area is swept out by a particle as it moves along a curve.[clarification needed] In the adjoining figure, suppose that a particle moves along the blue curve. At a certain time t, the particle is located at point B, and a short while later, at time t + Δt, the particle has moved to point C. The region swept out by the particle is shaded in green in the figure, bounded by the line segments AB and AC and the curve along which the particle moves. The areal velocity magnitude (i.e., the areal speed) is this region's area divided by the time interval Δt in the limit that Δt becomes vanishingly small. The vector direction is postulated normal to the plane containing the position and velocity vectors of the particle, following a convention known as the right hand rule.

Illustration of Kepler's second law. The planet moves faster near the Sun, so the same area is swept out in a given time as at larger distances, where the planet moves more slowly.

In the situation of the first figure, the area swept out during time period Δt by the particle is approximately equal to the area of triangle ABC. As Δt approaches zero this near-equality becomes exact as a limit.

On the other hand, the angular momentum of the particle is

Conservation of areal velocity is a general property of central force motion,[1] and, within the context of classical mechanics, is equivalent to the conservation of angular momentum.