Short description: Projection of the Earth's equator out into space 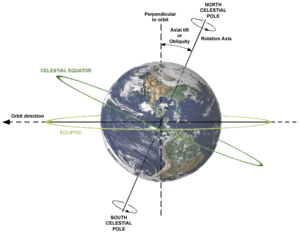 The celestial equator is currently inclined by about 23.44° to the ecliptic plane. The image shows the relations between Earth's axial tilt (or obliquity), rotation axis, and orbital plane.

These are the most globally visible constellations.

Over thousands of years, the orientation of Earth's equator and thus the constellations the celestial equator passes through will change due to axial precession.