Agglutination is the clumping of particles. The word agglutination comes from the Latin agglutinare (glueing to).

Agglutination is the process that occurs if an antigen is mixed with its corresponding antibody called isoagglutinin. This term is commonly used in blood grouping.

This occurs in biology in two main examples: 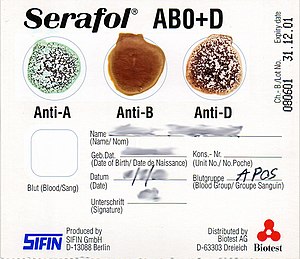 The 'bedside card' method of blood typing, in this case using a Serafol card. The result is blood group A positive.

In cross-matching, donor red blood cells and recipient's serum or plasma are incubated together. If agglutination occurs, this indicates that the donor and recipient blood types are incompatible.

Leukoagglutination occurs when the particles involved are white blood cells.

An example is the PH-L form of phytohaemagglutinin.

Agglutination is commonly used as a method of identifying specific bacterial antigens, and in turn, the identity of such bacteria. Because the clumping reaction occurs quickly and is easy to produce, agglutination is an important technique in diagnosis.

Two bacteriologists, Herbert Edward Durham (-1945) and Max von Gruber (1853–1927), discovered specific agglutination in 1896. The clumping became known as Gruber-Durham reaction. Gruber introduced the term agglutinin (from the Latin) for any substance that caused agglutination of cells.

French physician Fernand Widal (1862–1929) put Gruber and Durham's discovery to practical use later in 1896, using the reaction as the basis for a test for typhoid fever. Widal found that blood serum from a typhoid carrier caused a culture of typhoid bacteria to clump, whereas serum from a typhoid-free person did not. This Widal test was the first example of serum diagnosis.

Austrian physician Karl Landsteiner found another important practical application of the agglutination reaction in 1900. Landsteiner's agglutination tests and his discovery of ABO blood groups was the start of the science of blood transfusion and serology which has made transfusion possible and safer.