An astrarium, also called a planetarium, is the mechanical representation of the cyclic nature of astronomical objects in one timepiece. It is an astronomical clock. 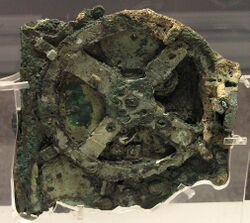 The first astraria were mechanical devices. Archimedes is said to have used a primitive version that could predict the positions of the Sun, the Moon, and the planets. On May 17, 1902, an archaeologist named Valerios Stais discovered that a lump of oxidated material, which had been recovered from a shipwreck near Antikythera, held within it a mechanism with cogwheels. This mechanism, known as the Antikythera mechanism, was recently redated to end of the 2nd century BCE.[1] Extensive study of the fragments, using X-rays, has revealed enough details (gears, pinions, crank) to enable researchers to build partial replicas of the original device.[2][3][4] Engraved on the major gears are the names of the planets, which leaves little doubt as to the intended use of the mechanism.

By the end of the Roman Empire, the know-how and science behind this piece of clockwork was lost.

The first modern documented astrarium clock was completed in 1364 by Giovanni de' Dondi (1318–1388), a scholar and physician of the Middle Ages interested in astronomy and horology. The original clock, consisting of 107 wheels and pinions, has been lost, perhaps during the sacking of Mantua in 1630, but de' Dondi left detailed descriptions which have survived, enabling a reconstruction of the clock. It displays the mean time, sidereal, (or star), time and the motions of the sun, moon and the five then-known planets Venus, Mars, Saturn, Mercury, and Jupiter. It was conceived according to a Ptolemaic conception of the solar system. De' Dondi was inspired by his father Jacopo who designed the astronomical clock in the Piazzi dei Signori, Padua, in 1344 – one of the first of its type.

In later ages more astraria were built. A famous example is the Eise Eisinga Planetarium built in 1774 by Eise Eisinga from Dronrijp, Friesland, the Netherlands. It displayed all the planets and was fixed to the ceiling in a house in Franeker where it can still be visited.

In modern times, the astrarium has grown into a tourist attraction as a commercially exploited planetarium-showing in IMAX theaters. With such presentations as 'The history of the Universe', as well as other astronomical phenomena.