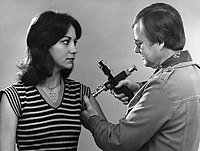 A jet injector is a type of medical injecting syringe device used for a method of drug delivery known as jet injection, in which a narrow, high-pressure stream of liquid that penetrates the outermost layer of the skin (stratum corneum) to deliver medication to targeted underlying tissues of the epidermis or dermis ("cutaneous" injection, also known as classical "intradermal" injection), fat ("subcutaneous" injection), or muscle ("intramuscular" injection).

The jet stream is usually generated by the pressure of a piston in an enclosed liquid-filled chamber. The piston is usually pushed by the release of a compressed metal spring, although investigational devices may use piezoelectric effects and other novel technologies to pressurize the liquid in the chamber. The springs of currently-marketed and historical devices may be compressed by operator muscle power, hydraulic fluid, built-in battery-operated motors, compressed air or gas, and other means. Gas-powered and hydraulically-powered devices may involve hoses that carry compressed gas or hydraulic fluid from separate cylinders of gas, electric air pumps, foot-pedal pumps, or other components to reduce the size and weight of the hand-held part of the system and to allow faster and less-tiring methods to perform consecutive vaccinations.

Jet injectors were used for mass vaccination, and as an alternative to needle syringes for diabetics to inject insulin. However, the World Health Organization no longer recommends jet injectors for vaccination due to risks of disease transmission.[1] Similar devices are used in other industries to inject grease or other fluid.

The term "hypospray", although better known within science fiction, originates from an actual jet injector known as the Hypospray and has been cited within several scientific articles.[2][3][4]

A Med-E-Jet vaccination gun from 1980

A jet injector, also known as a jet gun injector, air gun, or pneumatic injector, is a medical instrument that uses a high-pressure jet of liquid medication to penetrate the skin and deliver medication under the skin without a needle. Jet injectors can be single-dose or multi-dose jet injectors.

Throughout the years jet injectors have been redesigned to overcome the risk of carrying contamination to subsequent subjects. To try to stop the risk, researchers placed a single-use protective cap over the reusable nozzle. The protective cap was intended to act as a shield between the reusable nozzle and the patient's skin. After each injection the cap would be discarded and replaced with a sterile one. These devices were known as protector cap needle-free injectors or PCNFI.[5] A safety test by Kelly and colleagues (2008)[6] found a PCNFI device failed to prevent contamination. After administering injections to hepatitis B patients, researchers found hepatitis B had penetrated the protective cap and contaminated the internal components of the jet injector, showing that the internal fluid pathway and patient contacting parts cannot safely be reused.

Researchers developed a new jet injection design by combining the drug reservoir, plunger and nozzle into a single-use disposable cartridge. The cartridge is placed onto the tip of the jet injector and when activated a rod pushes the plunger forward. This device is known as a disposable-cartridge jet injectors (DCJI).[5]

The International Standards Organization recommended abandoning the use of the name "jet injector”, which is associated with a risk of cross-contamination and rather refer to newer devices as "needle-free injectors".[7]

The Biojector 2000 is a made of gas-cartridge-powered jet injector. It is claimed by its manufacturer that it can deliver intramuscular injections and subcutaneous injections up to 1 milliliter. The part which touches the patient's skin is single-use and can be replaced easily. It can be powered from a large compressed gas cylinder instead of gas cartridges. It is made by Bioject.[8]

The Vision (MJ7) is a compact, spring-powered jet injector. It can deliver up to 1.6 ml in 0.03 ml increments, and is designed to last 3000 injections. The medication travels through a hole in the needle-free syringe that is about half the diameter of a 30-gauge syringe. The part which touches the patient's skin can be used for a week. The device was designed by Antares Pharma (formerly Medi-Ject).[9]

The PharmaJet Needle-Free Injector delivers vaccines either intramuscularly or subcutaneously by means of a narrow, precise fluid stream syringe that delivers the medicine or vaccine through the skin in one-tenth of a second.[10]

Researchers from the University of Twente in the Netherlands patented a Jet Injection System, comprising a microfluidic device for jet ejection and a laser-based heating system. A continuous laser beam - also called a continuous-wave laser - heats the liquid to be administered, which is then launched in a droplet form across the epidermis and then slows down into the tissue below.[12]

Since the jet injector breaks the barrier of the skin, there is a risk of blood and biological material being transferred from one user to the next. Research on the risks of cross-contamination arose immediately after the invention of jet injection technology.

There are three inherent problems with jet injectors:

Splash-back refers to the jet stream penetrating the outer skin at a high velocity causing the jet stream to ricochet backwards and contaminate the nozzle.[13]

Fluid suck-back occurs when blood left on the nozzle of the jet injector is sucked back into the injector orifice, contaminating the next dose to be fired.[13]

The CDC has acknowledged that the most widely used jet injector in the world, the Ped-O-Jet, sucked fluid back into the gun. "After injections, they [CDC] observed fluid remaining on the Ped-O-Jet nozzle being sucked back into the device upon its cocking and refilling for the next injection (beyond the reach of alcohol swabbing or acetone swabbing)," stated Dr. Bruce Weniger.[16]

Retrograde flow happens after the jet stream penetrates the skin and creates a hole, if the pressure of the jet stream causes the spray, after mixing with tissue fluids and blood, to rebound back out of the hole, against the incoming jet stream and back into the nozzle orifice.[13]

Hepatitis B can be transmitted by less than one nanolitre[21] so makers of injectors must ensure there is no cross-contamination between applications. The World Health Organization no longer recommends jet injectors for vaccination due to risks of disease transmission.[1]

Numerous studies have found cross-infection of diseases from jet injections. An experiment using mice, published in 1985, showed that jet injectors would frequently transmit the viral infection lactate dehydrogenase elevating virus (LDV) from one mouse to another.[22] Another study used the device on a calf, then tested the fluid remaining in the injector for blood. Every injector they tested had detectable blood in a quantity sufficient to pass on a virus such as hepatitis B.[21]

From 1984 to 1985, a weight-loss clinic in Los Angeles administered human chorionic gonadotropin (hCG) with a Med-E-Jet injector. CDC investigation found 57 out of 239 people who had received the jet injection tested positive for hepatitis B.[23]

Jet injectors have also been found to inoculate bacteria from the environment into users. In 1988 a podiatry clinic used a jet injector to deliver local anaesthetic into patients' toes. Eight of these patients developed infections caused by Mycobacterium chelonae. The injector was stored in a container of water and disinfectant between use, but the organism grew in the container.[24] This species of bacteria is sometimes found in tap water, and had been previously associated with infections from jet injectors.[25]

Hypospray Jet Injector used in typhus vaccination at a US military base, 1959.

A jet injector being used in 1973, in Campada, Guinea-Bissau