The POWER3 is a microprocessor, designed and exclusively manufactured by IBM, that implemented the 64-bit version of the PowerPC instruction set architecture (ISA), including all of the optional instructions of the ISA (at the time) such as instructions present in the POWER2 version of the POWER ISA but not in the PowerPC ISA. It was introduced on 5 October 1998, debuting in the RS/6000 43P Model 260, a high-end graphics workstation.[1] The POWER3 was originally supposed to be called the PowerPC 630 but was renamed, probably to differentiate the server-oriented POWER processors it replaced from the more consumer-oriented 32-bit PowerPCs. The POWER3 was the successor of the P2SC derivative of the POWER2 and completed IBM's long-delayed transition from POWER to PowerPC, which was originally scheduled to conclude in 1995. The POWER3 was used in IBM RS/6000 servers and workstations at 200 MHz. It competed with the Digital Equipment Corporation (DEC) Alpha 21264 and the Hewlett-Packard (HP) PA-8500.

The logic schema of the POWER3 processor

In stage three, instructions in the instruction queues that are ready for execution have their operands read from the register files. The general-purpose register file contains 48 registers, of which 32 are general-purpose registers and 16 are rename registers for register renaming. To reduce the number of ports required to provide data and receive results, the general purpose register file is duplicated so that there are two copies, the first supporting three integer execution units and the second supporting the two load/store units. This scheme was similar to a contemporary microprocessor, the DEC Alpha 21264, but was simpler as it did not require an extra clock cycle to synchronize the two copies due to the POWER3's higher cycle times. The floating-point register file contains 56 registers, of which 32 are floating-point registers and 24 rename registers. Compared to the PowerPC 620, there were more rename registers, which allowed more instructions to be executed out of order, improving performance.

The PowerPC 620 data cache was optimized for technical and scientific applications. Its capacity was doubled to 64 KB, to improve the cache-hit rate; the cache was dual-ported, implemented by interleaving eight banks, to enable two loads or two stores to be performed in one cycle in certain cases; and the line-size was increased to 128-bytes. The L2 cache bus was doubled in width to 256 bits to compensate for the larger cache line size and to retain a four-cycle latency for cache refills.

The POWER3 contained 15 million transistors on a 270 mm2 die. It was fabricated in IBM's CMOS-6S2 process, a complementary metal–oxide–semiconductor process that is a hybrid of 0.25 μm feature sizes and 0.35 μm metal layers. The process features five layers of aluminium. It was packaged in the same 1,088-column ceramic column grid array as the P2SC, but with a different pin out. 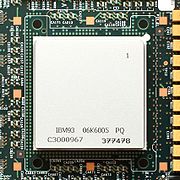 The POWER3-II was an improved POWER3 that increased the clock frequency to 450 MHz. It contains 23 million transistors and measured 170 mm2. It was fabricated in the IBM CMOS7S process, a 0.22 μm CMOS process with six levels of copper interconnect. It was succeeded by the POWER4 in 2001.