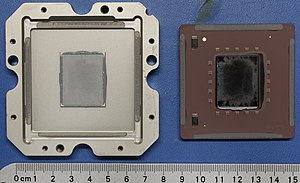 IBM won a $244 million DARPA contract in November 2006 to develop a petascale supercomputer architecture before the end of 2010 in the HPCS project. The contract also states that the architecture shall be available commercially. IBM's proposal, PERCS (Productive, Easy-to-use, Reliable Computer System), which won them the contract, is based on the POWER7 processor, AIX operating system and General Parallel File System.[4]

One feature that IBM and DARPA collaborated on is modifying the addressing and page table hardware to support global shared memory space for POWER7 clusters. This enables research scientists to program a cluster as if it were a single system, without using message passing. From a productivity standpoint, this is essential since some scientists are not conversant with MPI or other parallel programming techniques used in clusters.[5]

The POWER7 superscalar symmetric multiprocessor architecture was a substantial evolution from the POWER6 design, focusing more on power efficiency through multiple cores and simultaneous multithreading (SMT).[6] The POWER6 architecture was built from the ground up to maximize processor frequency at the cost of power efficiency. It achieved a remarkable 5 GHz. While the POWER6 features a dual-core processor, each capable of two-way simultaneous multithreading (SMT), the IBM POWER 7 processor has up to eight cores, and four threads per core, for a total capacity of 32 simultaneous threads.[7]

IBM stated at ISCA 29[8] that peak performance was achieved by high frequency designs with 10–20 FO4 delays per pipeline stage at the cost of power efficiency. However, the POWER6 binary floating-point unit achieves a "6-cycle, 13-FO4 pipeline".[9][clarification needed] Therefore, the pipeline for the POWER7 CPU has been changed again, just as it was for the POWER5 and POWER6 designs. In some respects, this rework is similar to Intel's turn in 2005 that left the P4 7th-generation x86 microarchitecture.

The POWER7 superscalar symmetric multiprocessor is available with 4, 6, or 8 physical cores per microchip, in a 1 to 32-way design, with up to 1024 SMTs and a slightly different microarchitecture and interfaces for supporting extended/Sub-Specifications in reference to the Power ISA and/or different system architectures. For example, in the Supercomputing (HPC) System Power 775 it is packaged as a 32-way quad-chip-module (QCM) with 256 physical cores and 1024 SMTs.[10] There is also a special TurboCore mode that can turn off half of the cores from an eight-core processor, but those 4 cores have access to all the memory controllers and L3 cache at increased clock speeds. This makes each core's performance higher which is important for workloads which require the fastest sequential performance at the cost of reduced parallel performance. TurboCore mode can reduce "software costs in half for those applications that are licensed per core, while increasing per core performance from that software."[11] The new IBM Power 780 scalable, high-end servers featuring the new TurboCore workload optimizing mode and delivering up to double performance per core of POWER6 based systems.[11]

Each core is capable of four-way simultaneous multithreading (SMT). The POWER7 has approximately 1.2 billion transistors and is 567 mm2 large fabricated on a 45 nm process. A notable difference from POWER6 is that the POWER7 executes instructions out-of-order instead of in-order. Despite the decrease in maximum frequency compared to POWER6 (4.25 GHz vs 5.0 GHz), each core has higher performance than the POWER6, while each processor has up to 4 times the number of cores.

This gives the following theoretical single precision (SP) performance figures (based on a 4.14 GHz 8 core implementation):

For comparison, the latest microarchitecture from Intel, Haswell (that came out 3 years later than the POWER7!), can do 16 DP FLOPs or 32 SP FLOPs per cycle (8/16 DP/SP fused multiply-add spread across 2× 256-bit AVX2 FP vector units).[16] At 3.4 GHz (i7-4770) this translates into 108.8 SP GFLOPS per core and 435.2 SP GFLOPS peak performance across the 4-core chip, giving roughly similar levels of performance per core, without taking into account the effects or benefits of Intel's Turbo Boost technology.

Notice that the POWER7 chip significantly outperformed (2×–5×) the i7 in some benchmarks (bwaves, cactusADM, lbm) while also being significantly slower (2x-3x) in most others. This is indicative of major architectural differences between the two chips / mainboards / memory systems etc.: they were designed with different workloads in mind.

However, overall, in a very broad sense, one can say that the floating-point performance of the POWER7 is similar to that of the Haswell i7.

IBM introduced the POWER7+ processor at the Hot Chips 24 conference in August 2012. It is an updated version with higher speeds, more cache and integrated accelerators. It is manufactured on a 32 nm fabrication process.[19]

IBM also offers 5 POWER7 based BladeCenters.[21] Specifications are shown in the table below.

The following are supercomputer projects that use the POWER7 processor: