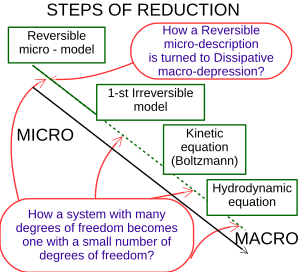 The Boltzmann equation or Boltzmann transport equation (BTE) describes the statistical behaviour of a thermodynamic system not in a state of equilibrium, devised by Ludwig Boltzmann in 1872.[2] The classic example of such a system is a fluid with temperature gradients in space causing heat to flow from hotter regions to colder ones, by the random but biased transport of the particles making up that fluid. In the modern literature the term Boltzmann equation is often used in a more general sense, referring to any kinetic equation that describes the change of a macroscopic quantity in a thermodynamic system, such as energy, charge or particle number.

The Boltzmann equation can be used to determine how physical quantities change, such as heat energy and momentum, when a fluid is in transport. One may also derive other properties characteristic to fluids such as viscosity, thermal conductivity, and electrical conductivity (by treating the charge carriers in a material as a gas).[2] See also convection–diffusion equation.

The equation is a nonlinear integro-differential equation, and the unknown function in the equation is a probability density function in six-dimensional space of a particle position and momentum. The problem of existence and uniqueness of solutions is still not fully resolved, but some recent results are quite promising.[3][4]

The phase space and density function

The set of all possible positions r and momenta p is called the phase space of the system; in other words a set of three coordinates for each position coordinate x, y, z, and three more for each momentum component px, py, pz. The entire space is 6-dimensional: a point in this space is (r, p) = (x, y, z, px, py, pz), and each coordinate is parameterized by time t. The small volume ("differential volume element") is written

is the number of molecules which all have positions lying within a volume element [math]\displaystyle{ d^3\bf{r} }[/math] about r and momenta lying within a momentum space element [math]\displaystyle{ \mathrm{d}^3\bf{p} }[/math] about p, at time t.[5] Integrating over a region of position space and momentum space gives the total number of particles which have positions and momenta in that region:

which is a 6-fold integral. While f is associated with a number of particles, the phase space is for one-particle (not all of them, which is usually the case with deterministic many-body systems), since only one r and p is in question. It is not part of the analysis to use r1, p1 for particle 1, r2, p2 for particle 2, etc. up to rN, pN for particle N.

It is assumed the particles in the system are identical (so each has an identical mass m). For a mixture of more than one chemical species, one distribution is needed for each, see below.

The general equation can then be written as[6]

where the "force" term corresponds to the forces exerted on the particles by an external influence (not by the particles themselves), the "diff" term represents the diffusion of particles, and "coll" is the collision term – accounting for the forces acting between particles in collisions. Expressions for each term on the right side are provided below.[6]

Note that some authors use the particle velocity v instead of momentum p; they are related in the definition of momentum by p = mv.

Consider particles described by f, each experiencing an external force F not due to other particles (see the collision term for the latter treatment).

The total differential of f is:

where ∇ is the gradient operator, · is the dot product,

is a shorthand for the momentum analogue of ∇, and êx, êy, êz are Cartesian unit vectors.

Dividing (3) by dt and substituting into (2) gives:

In this context, F(r, t) is the force field acting on the particles in the fluid, and m is the mass of the particles. The term on the right hand side is added to describe the effect of collisions between particles; if it is zero then the particles do not collide. The collisionless Boltzmann equation, where individual collisions are replaced with long-range aggregated interactions, e.g. Coulomb interactions, is often called the Vlasov equation.

This equation is more useful than the principal one above, yet still incomplete, since f cannot be solved unless the collision term in f is known. This term cannot be found as easily or generally as the others – it is a statistical term representing the particle collisions, and requires knowledge of the statistics the particles obey, like the Maxwell–Boltzmann, Fermi–Dirac or Bose–Einstein distributions.

Simplifications to the collision term

Since much of the challenge in solving the Boltzmann equation originates with the complex collision term, attempts have been made to "model" and simplify the collision term. The best known model equation is due to Bhatnagar, Gross and Krook.[7] The assumption in the BGK approximation is that the effect of molecular collisions is to force a non-equilibrium distribution function at a point in physical space back to a Maxwellian equilibrium distribution function and that the rate at which this occurs is proportional to the molecular collision frequency. The Boltzmann equation is therefore modified to the BGK form:

General equation (for a mixture)

and Iij is the differential cross-section, as before, between particles i and j. The integration is over the momentum components in the integrand (which are labelled i and j). The sum of integrals describes the entry and exit of particles of species i in or out of the phase-space element.

The Boltzmann equation can be used to derive the fluid dynamic conservation laws for mass, charge, momentum, and energy.[8]:p 163 For a fluid consisting of only one kind of particle, the number density n is given by

The average value of any function A is

Letting [math]\displaystyle{ A = m(v_i)^0 = m }[/math], the mass of the particle, the integrated Boltzmann equation becomes the conservation of mass equation:[8]:pp 12,168

Letting [math]\displaystyle{ A = m(v_i)^1 = p_i }[/math], the momentum of the particle, the integrated Boltzmann equation becomes the conservation of momentum equation:[8]:pp 15,169

In Hamiltonian mechanics, the Boltzmann equation is often written more generally as

It is possible to write down relativistic quantum Boltzmann equations for relativistic quantum systems in which the number of particles is not conserved in collisions. This has several applications in physical cosmology,[9] including the formation of the light elements in Big Bang nucleosynthesis, the production of dark matter and baryogenesis. It is not a priori clear that the state of a quantum system can be characterized by a classical phase space density f. However, for a wide class of applications a well-defined generalization of f exists which is the solution of an effective Boltzmann equation that can be derived from first principles of quantum field theory.[10]

The Boltzmann equation is of use in galactic dynamics. A galaxy, under certain assumptions, may be approximated as a continuous fluid; its mass distribution is then represented by f; in galaxies, physical collisions between the stars are very rare, and the effect of gravitational collisions can be neglected for times far longer than the age of the universe.

Its generalization in general relativity.[11] is

In physical cosmology the fully covariant approach has been used to study the cosmic microwave background radiation.[14] More generically the study of processes in the early universe often attempt to take into account the effects of quantum mechanics and general relativity.[9] In the very dense medium formed by the primordial plasma after the Big Bang, particles are continuously created and annihilated. In such an environment quantum coherence and the spatial extension of the wavefunction can affect the dynamics, making it questionable whether the classical phase space distribution f that appears in the Boltzmann equation is suitable to describe the system. In many cases it is, however, possible to derive an effective Boltzmann equation for a generalized distribution function from first principles of quantum field theory.[10] This includes the formation of the light elements in Big Bang nucleosynthesis, the production of dark matter and baryogenesis.

Exact solutions to the Boltzmann equations have been proven to exist in some cases;[15] this analytical approach provides insight, but is not generally usable in practical problems.

Instead, numerical methods (including finite elements and lattice Boltzmann methods) are generally used to find approximate solutions to the various forms of the Boltzmann equation. Example applications range from hypersonic aerodynamics in rarefied gas flows[16][17] to plasma flows.[18] An application of the Boltzmann equation in electrodynamics is the calculation of the electrical conductivity - the result is in leading order identical with the semiclassical result.[19]

Close to local equilibrium, solution of the Boltzmann equation can be represented by an asymptotic expansion in powers of Knudsen number (the Chapman-Enskog expansion[20]). The first two terms of this expansion give the Euler equations and the Navier-Stokes equations. The higher terms have singularities. The problem of developing mathematically the limiting processes, which lead from the atomistic view (represented by Boltzmann's equation) to the laws of motion of continua, is an important part of Hilbert's sixth problem.[21]

Limitations and further uses of the Boltzmann equation

The Boltzmann equation is valid only under several assumptions. For instance, the particles are assumed to be pointlike, i.e. without having a finite size. There exist a generalization of the Boltzmann equation that is called the Enskog equation.[22] The collision term is modified in Enskog equations such that finite size of particles, for example particles can be a sphere having a fixed radius.

No further degree of freedoms besides translational motion are assumed for the particles. If there are internal degree of freedom, the Boltzmann equation has to be generalized and might possess inelastic collisions.[22]

Many real fluids like liquids or dense gases have besides the features mentioned above more complex forms of collisions, there will be not only binary, but also ternary and higher order collissions.[23] These must be derived by using BBGKY hierarchy.

Boltzmann-like equations are also used for the movement of cells.[24][25] Since cells are composite particles that carry internal degree of freedom, the corresonding generalized Boltzmann equations must have inelastic collission integrals. Such equations can describe invasions of cancer cells in tissue, morphogenesis, and chemotaxis-related effects.