Earth's climate is largely determined by the planet's energy budget, i.e., the balance of incoming and outgoing radiation. It is measured by satellites and shown in W/m2.[1]

Earth's energy budget accounts for the balance between the energy that Earth receives from the Sun,[note 1] and the energy the Earth radiates back into outer space after having been distributed throughout the five components of Earth's climate system.[2] This system is made up of Earth's water, ice, atmosphere, rocky crust, and all living things.[3]

Received radiation is unevenly distributed over the planet, because the Sun heats equatorial regions more than polar regions. "The atmosphere and ocean work non-stop to even out solar heating imbalances through evaporation of surface water, convection, rainfall, winds, and ocean circulation."[5] Earth is very close to being in radiative equilibrium, the situation where the incoming solar energy is balanced by an equal flow of heat to space; under that condition, global temperatures will be relatively stable. Globally, over the course of the year, the Earth system—land surfaces, oceans, and atmosphere—absorbs and then radiates back to space an average of about 340 watts of solar power per square meter. Anything that increases or decreases the amount of incoming or outgoing energy will change global temperatures in response.[5]

However, Earth's energy balance and heat fluxes depend on many factors, such as atmospheric composition (mainly aerosols and greenhouse gases), the albedo (reflectivity) of surface properties, cloud cover and vegetation and land use patterns.

Changes in surface temperature due to Earth's energy budget do not occur instantaneously, due to the inertia of the oceans and the cryosphere. The net heat flux is buffered primarily by becoming part of the ocean's heat content, until a new equilibrium state is established between radiative forcings and the climate response.[6] 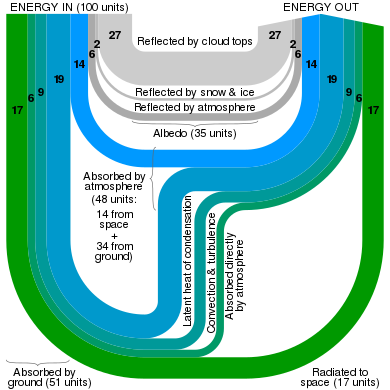 A Sankey diagram illustrating the Earth's energy budget described in this section – line thickness is linearly proportional to relative amount of energy.[7]

In spite of the enormous transfers of energy into and from the Earth, it maintains a relatively constant temperature because, as a whole, there is little net gain or loss: Earth emits via atmospheric and terrestrial radiation (shifted to longer electromagnetic wavelengths) to space about the same amount of energy as it receives via insolation (all forms of electromagnetic radiation).

To quantify Earth's heat budget or heat balance, let the insolation received at the top of the atmosphere be 100 units (100 units = about 1,360 watts per square meter facing the sun), as shown in the accompanying illustration. Called the albedo of Earth, around 35 units are reflected back to space: 27 from the top of clouds, 2 from snow and ice-covered areas, and 6 by other parts of the atmosphere. The 65 remaining units are absorbed: 14 within the atmosphere and 51 by the Earth's surface. These 51 units are radiated to space in the form of terrestrial radiation: 17 directly radiated to space and 34 absorbed by the atmosphere (19 through latent heat of condensation, 9 via convection and turbulence, and 6 directly absorbed). The 48 units absorbed by the atmosphere (34 units from terrestrial radiation and 14 from insolation) are finally radiated back to space. These 65 units (17 from the ground and 48 from the atmosphere) balance the 65 units absorbed from the sun in order to maintain zero net gain of energy by the Earth.[7]

The total amount of energy received per second at the top of Earth's atmosphere (TOA) is measured in watts and is given by the solar constant times the cross-sectional area of the Earth corresponded to the radiation . Because the surface area of a sphere is four times the cross-sectional area of a sphere (i.e. the area of a circle), the average TOA flux is one quarter of the solar constant and so is approximately 340 W/m2.[1][8] Since the absorption varies with location as well as with diurnal, seasonal and annual variations, the numbers quoted are long-term averages, typically averaged from multiple satellite measurements.[1]

The geothermal heat flux from the Earth's interior is estimated to be 47 terawatts[9] and split approximately equally between radiogenic heat and heat leftover from the Earth's formation. This comes to 0.087 watt/square metre, which represents only 0.027% of Earth's total energy budget at the surface, which is dominated by 173,000 terawatts of incoming solar radiation.[10]

Human production of energy is even lower, at an estimated 18 TW.[citation needed]

Photosynthesis has a larger effect: photosynthetic efficiency turns up to 2% of the sunlight striking plants into biomass. 100 to 140[11] TW (or around 0.08%) of the initial energy gets captured by photosynthesis, giving energy to plants.[clarification needed]

Other minor sources of energy are usually ignored in these calculations, including accretion of interplanetary dust and solar wind, light from stars other than the Sun and the thermal radiation from space. Earlier, Joseph Fourier had claimed that deep space radiation was significant in a paper often cited as the first on the greenhouse effect.[12]

Longwave radiation is usually defined as outgoing infrared energy leaving the planet. However, the atmosphere absorbs parts initially, or cloud cover can reflect radiation. Generally, heat energy is transported between the planet's surface layers (land and ocean) to the atmosphere, transported via evapotranspiration and latent heat fluxes or conduction/convection processes.[1] Ultimately, energy is radiated in the form of longwave infrared radiation back into space.

Recent satellite observations indicate additional precipitation, which is sustained by increased energy leaving the surface through evaporation (the latent heat flux), offsetting increases in longwave flux to the surface.[4]

An imbalance in the Earth radiation budget requires components of the climate system to change temperature over time. The ocean is an effective absorber of solar energy and has a far greater heat capacity than the atmosphere. The measurement of the change in temperature is very difficult since it corresponds to millidegrees over the short time frame of the ARGO measurements. Ocean heat content change (OHC) over time is same measurement as the temperature anomaly over time.

NASA's Clouds and the Earth's Radiant Energy System (CERES) instruments are part of the NASA's Earth Observing System (EOS) since 1998. CERES is designed to measure both solar-reflected (short wavelength) and Earth-emitted (long wavelength) radiation.[14] Researchers have used data from CERES, AIRS, CloudSat, LandSat, and other EOS instruments to look for trends of anthropogenic radiative forcing embedded within the observed energy imbalances. They presented a model showing a rise of +0.53 W m-2 (+/-0.11 W m-2) from years 2003 to 2018; with about 20% from a decrease in reflected short-wave radiation, and the remainder from a decrease in outgoing long-wavelength radiation.[15][16][17]

Diagram showing the energy budget of Earth's atmosphere, which includes the greenhouse effect

The major atmospheric gases (oxygen and nitrogen) are transparent to incoming sunlight but are also transparent to outgoing thermal (infrared) radiation. However, water vapor, carbon dioxide, methane and other trace gases are opaque to many wavelengths of thermal radiation. The Earth's surface radiates the net equivalent of 17 percent of the incoming solar energy in the form of thermal infrared. However, the amount that directly escapes to space is only about 12 percent of incoming solar energy. The remaining fraction, 5 to 6 percent, is absorbed by the atmosphere by greenhouse gas molecules. [18]

Atmospheric gases only absorb some wavelengths of energy but are transparent to others. The absorption patterns of water vapor (blue peaks) and carbon dioxide (pink peaks) overlap in some wavelengths. Carbon dioxide is not as strong a greenhouse gas as water vapor, but it absorbs energy in wavelengths (12–15 micrometres) that water vapor does not, partially closing the "window" through which heat radiated by the surface would normally escape to space. (Illustration NASA, Robert Rohde)[19]

When greenhouse gas molecules absorb thermal infrared energy, their temperature rises. Those gases then radiate an increased amount of thermal infrared energy in all directions. Heat radiated upward continues to encounter greenhouse gas molecules; those molecules also absorb the heat, and their temperature rises and the amount of heat they radiate increases. The atmosphere thins with altitude, and at roughly 5–6 kilometres, the concentration of greenhouse gases in the overlying atmosphere is so thin that heat can escape to space.[18]

Because greenhouse gas molecules radiate infrared energy in all directions, some of it spreads downward and ultimately returns to the Earth's surface, where it is absorbed. The Earth's surface temperature is thus higher than it would be if it were heated only by direct solar heating. This supplemental heating is the natural greenhouse effect.[18] It is as if the Earth is covered by a blanket that allows high frequency radiation (sunlight) to enter, but slows the rate at which the low frequency infrared radiant energy emitted by the Earth leaves.

A change in the incident radiated portion of the energy budget is referred to as a radiative forcing.

Climate sensitivity is the steady state change in the equilibrium temperature as a result of changes in the energy budget.

Climate forcings are changes that cause temperatures to rise or fall, disrupting the energy balance. Natural climate forcings include changes in the Sun's brightness, Milankovitch cycles (small variations in the shape of Earth's orbit and its axis of rotation that occur over thousands of years) and volcanic eruptions that inject light-reflecting particles as high as the stratosphere. Man-made forcings include particle pollution (aerosols) that absorb and reflect incoming sunlight; deforestation, which changes how the surface reflects and absorbs sunlight; and the rising concentration of atmospheric carbon dioxide and other greenhouse gases, which decreases the rate at which heat is radiated to space.

A forcing can trigger feedbacks that intensify (positive feedback) or weaken (negative feedback) the original forcing. For example, loss of ice at the poles, which makes them less reflective, causes greater absorption of energy and so increases the rate at which the ice melts, is an example of a positive feedback.[19]

The observed planetary energy imbalance during the recent solar minimum shows that solar forcing of climate, although natural and significant, is overwhelmed by anthropogenic climate forcing.[20]

In 2012, NASA scientists reported that to stop global warming atmospheric CO2 content would have to be reduced to 350 ppm or less, assuming all other climate forcings were fixed. The impact of anthropogenic aerosols has not been quantified, but individual aerosol types are thought to have substantial heating and cooling effects.[20]