In physics and materials science, plasticity, also known as plastic deformation, is the ability of a solid material to undergo permanent deformation, a non-reversible change of shape in response to applied forces.[1][2] For example, a solid piece of metal being bent or pounded into a new shape displays plasticity as permanent changes occur within the material itself. In engineering, the transition from elastic behavior to plastic behavior is called yield.

Plastic deformation is observed in most materials, particularly metals, soils, rocks, concrete, foams, bone and skin.[3][4][5][6][7][8] However, the physical mechanisms that cause plastic deformation can vary widely. At a crystalline scale, plasticity in metals is usually a consequence of dislocations. Such defects are relatively rare in most crystalline materials, but are numerous in some and part of their crystal structure; in such cases, plastic crystallinity can result. In brittle materials such as rock, concrete and bone, plasticity is caused predominantly by slip at microcracks. In cellular materials such as liquid foams or biological tissues, plasticity is mainly a consequence of bubble or cell rearrangements, notably T1 processes.

For many ductile metals, tensile loading applied to a sample will cause it to behave in an elastic manner. Each increment of load is accompanied by a proportional increment in extension. When the load is removed, the piece returns to its original size. However, once the load exceeds a threshold – the yield strength – the extension increases more rapidly than in the elastic region; now when the load is removed, some degree of extension will remain.

The plasticity of a material is directly proportional to the ductility and malleability of the material. 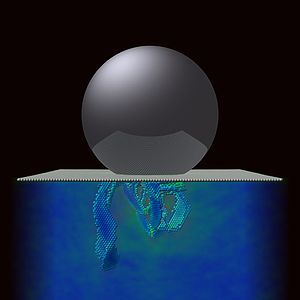 Plasticity under a spherical nanoindenter in (111) copper. All particles in ideal lattice positions are omitted and the color code refers to the von Mises stress field.

Plasticity in a crystal of pure metal is primarily caused by two modes of deformation in the crystal lattice: slip and twinning. Slip is a shear deformation which moves the atoms through many interatomic distances relative to their initial positions. Twinning is the plastic deformation which takes place along two planes due to a set of forces applied to a given metal piece.

Crystalline materials contain uniform planes of atoms organized with long-range order. Planes may slip past each other along their close-packed directions, as is shown on the slip systems page. The result is a permanent change of shape within the crystal and plastic deformation. The presence of dislocations increases the likelihood of planes.

On the nanoscale the primary plastic deformation in simple face centered cubic metals is reversible, as long as there is no material transport in form of cross-slip.[9]

The presence of other defects within a crystal may entangle dislocations or otherwise prevent them from gliding. When this happens, plasticity is localized to particular regions in the material. For crystals, these regions of localized plasticity are called shear bands.

Microplasticity is a local phenomenon in metals. It occurs for stress values where the metal is globally in the elastic domain while some local areas are in the plastic domain.[10]

In amorphous materials, the discussion of "dislocations" is inapplicable, since the entire material lacks long range order. These materials can still undergo plastic deformation. Since amorphous materials, like polymers, are not well-ordered, they contain a large amount of free volume, or wasted space. Pulling these materials in tension opens up these regions and can give materials a hazy appearance. This haziness is the result of crazing, where fibrils are formed within the material in regions of high hydrostatic stress. The material may go from an ordered appearance to a "crazy" pattern of strain and stretch marks.

These materials plastically deform when the bending moment exceeds the fully plastic moment. This applies to open cell foams where the bending moment is exerted on the cell walls. The foams can be made of any material with a plastic yield point which includes rigid polymers and metals. This method of modeling the foam as beams is only valid if the ratio of the density of the foam to the density of the matter is less than 0.3. This is because beams yield axially instead of bending. In closed cell foams, the yield strength is increased if the material is under tension because of the membrane that spans the face of the cells.

Soils, particularly clays, display a significant amount of inelasticity under load. The causes of plasticity in soils can be quite complex and are strongly dependent on the microstructure, chemical composition, and water content. Plastic behavior in soils is caused primarily by the rearrangement of clusters of adjacent grains.

Inelastic deformations of rocks and concrete are primarily caused by the formation of microcracks and sliding motions relative to these cracks. At high temperatures and pressures, plastic behavior can also be affected by the motion of dislocations in individual grains in the microstructure.

There are several mathematical descriptions of plasticity.[11] One is deformation theory (see e.g. Hooke's law) where the Cauchy stress tensor (of order d-1 in d dimensions) is a function of the strain tensor. Although this description is accurate when a small part of matter is subjected to increasing loading (such as strain loading), this theory cannot account for irreversibility.

Ductile materials can sustain large plastic deformations without fracture. However, even ductile metals will fracture when the strain becomes large enough—this is as a result of work hardening of the material, which causes it to become brittle. Heat treatment such as annealing can restore the ductility of a worked piece, so that shaping can continue.

In 1934, Egon Orowan, Michael Polanyi and Geoffrey Ingram Taylor, roughly simultaneously, realized that the plastic deformation of ductile materials could be explained in terms of the theory of dislocations. The mathematical theory of plasticity, flow plasticity theory, uses a set of non-linear, non-integrable equations to describe the set of changes on strain and stress with respect to a previous state and a small increase of deformation. 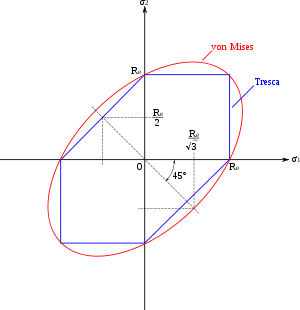 If the stress exceeds a critical value, as was mentioned above, the material will undergo plastic, or irreversible, deformation. This critical stress can be tensile or compressive. The Tresca and the von Mises criteria are commonly used to determine whether a material has yielded. However, these criteria have proved inadequate for a large range of materials and several other yield criteria are also in widespread use.

The Tresca criterion is based on the notion that when a material fails, it does so in shear, which is a relatively good assumption when considering metals. Given the principal stress state, we can use Mohr's circle to solve for the maximum shear stresses our material will experience and conclude that the material will fail if: 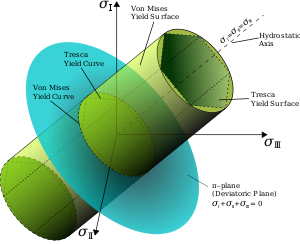 The Huber–von Mises criterion[12] is based on the Tresca criterion but takes into account the assumption that hydrostatic stresses do not contribute to material failure. M. T. Huber was the first who proposed the criterion of shear energy.[13][14] Von Mises solves for an effective stress under uniaxial loading, subtracting out hydrostatic stresses, and states that all effective stresses greater than that which causes material failure in uniaxial loading will result in plastic deformation.