Ruin Academy (established 2010) is an independent cross-over architectural research center in the Urban Core area of Taipei City, Taiwan.[1] It is 'set to re-think the industrial city and the modern man in the box' through research and a series of workshops.[2]

The Ruin Academy occupies an abandoned 5-story apartment building in central Taipei. All the interior walls of the building and all the windows are removed in order to grow bamboo and vegetables inside the house. The plants are situated so that their vegetation grows in front of the glassless window spaces, giving privacy to those inside. The professors and students are sleeping and working in mahogany made ad hoc dormitories and have a public sauna in the 5th floor. All the building is penetrated with 6 inch holes in order to let “rain inside”.[3]

The architectural control is in a process of giving up in order to let nature to step in. So far it is not giving up – it is too lazy. Architectural control will be given up. Modernism is lost and the industrial machine will become organic. This happens in Taipei and this is what we study. Ruin Academy is an organic machine. [4] Ruin is viewed as a tipping point when a man-made object becomes part of nature.[5]

The research and design tasks move freely in-between architecture, urban design, environmental art and other disciplines of art and science within the general framework of built human environment.[6] Anarchic Grandmothers, Academic Squatting, Urban Acupuncture-these are some of the ideas behind the Ruin Academy.[7] The Academy workshops include:

Local Knowledge is a theme penetrating through all the research elements and tying the Thirg Generation Taipei to the site-specific natural environment.[12] Casagrande: Architects’ and designers’ position about organic knowledge is tricky. We are not the ones who carry this collective genetic memory on, but we are in a better position to interpret and negotiate with it, step by step, like a shaman getting answers from the organic side. This can easily go very wrong, when architect starts copyrighting fragments of local knowledge under his ego. I guess often it would be enough to create a platform of accidents for the organic knowledge to surface, start cooking, and finding its own forms and dynamics. Design is not necessarily needed in here, and design should not replace reality – while organic knowledge is close to reality, nature. [13]

The Ruin Academy received the World Architecture Community Award in 2011.[14] The Academy is operated by the Taiwanese JUT Foundation for Arts & Architecture, in cooperation with Finland-based Casagrande Laboratory.[15]

The core of the Ruin Academy's cross-over architectural philosophy is the theory of the Third Generation City, the organic ruin of the industrial city. The Academy is focused in the research of the ruining processes of Taipei that keep the city alive.[16] The element of Ruin is viewed as something man-made having become part of nature.[17]

Third Generation City follows the first generation where humans' peacefully coexisted with nature and the second generation built walls and stone structures everywhere in an attempt to shut out nature. In the third generation however, nature, which can never be truly shut out, grows back through the ruins, through the cracks in the wall, sucking human nature back into the wider nature. Third Generation City concentrates on local knowledge and urban acupuncture.[18]
Third Generation cities are those that have grown from the ruin of industrial society but lie beyond its fordist structure of social and economic organization. Principally, Third Generation cities can be conceived of as rhizomatic in nature and ultimately, bound up with pre-existing and future conditions of human construction.[19]

[21]
Ruin Academy’s workshops bring an ecological approach to a mapping of the city’s informal activities. In this sense, lodging a constructed nature within an architecture of decay dramatizes the incursion of the organic in the city. Ruin Academy establishes a living fragment of the third generation city that counters the modern spaces produced by global technology and standardized construction methods.[22] 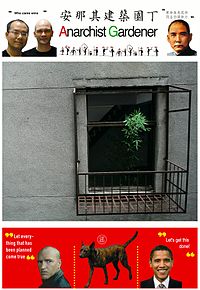 Cover of the Anarchist Gardener issue 1.

The Ruin Academy is publishing its own independent free newspaper the Anarchist Gardener edited by Nikita Wu.[23] The newspaper is an open form collage of the Academy's thinking on the future of the built human environment.[24] A special issue of the newspaper has been produced for the Shenzhen & Hong Kong Bi-City Biennial of Architecture and Urbanism 2012 .[25] and for the Austrian Museum of Contemporary art MAK exhibition Eastern Promises, 2013.[26]

The International Society of Biourbanism published in 2013 Marco Casagrande's book Biourban Acupuncture - From Treasure Hill of Taipei to Artena, which explains the operations, methodology and aims of the Ruin Academy in detail.[27] For the industrial cities, biourban acupuncture offers a path to achieve the Third Generation City. Cities, to be the fall of the machine, where “the ruin” is the reality produced by nature, that reclaims the artefact. Biourbanism happens, when nature force takes the initiative, affects the design of industrial society, and becomes co- architect.[28]