Societal attitudes towards abortion have varied throughout different historical periods and cultures. One manner of assessing such attitudes in the modern era has been to conduct opinion polls to measure levels of public opinion on abortion.

A May 2005 Euro RSCG/TNS Sofres poll examined attitudes toward abortion in 10 European countries, asking polltakers whether they agreed with the statement, "If a woman doesn't want children, she should be able to have an abortion".[8] Results were as follows:

An April 2003 CDC/ORC Macro report examined sentiment on abortion among women aged 15 to 44 in six former-Comecon countries, asking, "Do you think that (in any situation) a woman always has (or should have) the right to decide about her (own) pregnancy, including whether to have an abortion?"[9] The results were:

Among those whose response was "no" above, it was then asked if abortion would be acceptable under selected circumstances. Positive responses to this subsequent question were: 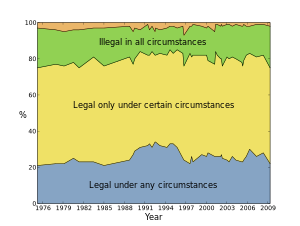 The poll also asked respondents whether they agreed with the statement, "The government should not interfere with a woman’s ability to have an abortion".

A survey in the United States of more than 10,000 physicians (not only obstetricians) came to the result that 34% of physicians would perform an abortion in certain situations, even if it were against their own beliefs. Approximately 54% would not, and for the remaining 12%, it would depend on circumstances.[27]

https://en.wikipedia.org/wiki/Societal attitudes towards abortion was the original source. Read more.