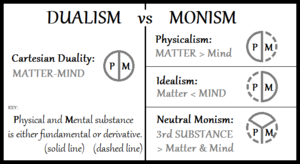 A diagram with neutral monism compared to Cartesian dualism, physicalism and idealism.

Neutral monism about the mind–body relationship is described by C. D. Broad in one of his earlier works, The Mind and Its Place in Nature. Broad's list of possible views about the mind-body problem, which became known simply as "Broad's famous list of 1925" (see chapter XIV of Broad's book, [2]) states the basis of what this theory had been and was to become. Some examples of philosophers who are seen to have a neutral monist view are Baruch Spinoza, David Hume, Ernst Mach, Richard Avenarius, Kenneth Sayre, Joseph Petzoldt and Jonathan Westphal. There are few self-proclaimed neutral monists. Most who are regarded as of this view were classified as such after their deaths.

Earlier, William James had propounded the notion in his essay "Does Consciousness Exist?" in 1904 (reprinted in Essays in Radical Empiricism in 1912).[3] Whately Carington in his book Matter, Mind, and Meaning (1949) advocated a form of neutral monism. He held that mind and matter both consist of the same kind of components known as "cognita" or sense data.[4][5][6] Russian psychologist Boris Sidis also appears to have adhered to some form of neutral monism.[7]

According to Stephen Stich and Ted Warfield, neutral monism has not been a popular view in philosophy as it is difficult to develop or understand the nature of the neutral elements.[8]

In 1921, Bertrand Russell adopted a similar position to that of William James.[9] Russell quotes from James's essay "Does 'consciousness' exist?" as follows:

"My thesis is," [James] says, "that if we start with the supposition that there is only one primal stuff or material in the world, a stuff of which everything is composed, and if we call that stuff 'pure experience,' then knowing can easily be explained as a particular sort of relation towards one another into which portions of pure experience may enter. The relation itself is a part of pure experience; one of its 'terms' becomes the subject or bearer of the knowledge, the knower, the other becomes the object known (p. 4)."[10]

Russell summarizes this notion as follows:

James's view is that the raw material out of which the world is built up is not of two sorts, one matter and the other mind, but that it is arranged in different patterns by its inter-relations, and that some arrangements may be called mental, while others may be called physical.[11]

the American realists [...] Professor R. B. Perry of Harvard and Mr. Edwin B. Holt [...] have derived a strong impulsion from James, but have more interest than he had in logic and mathematics and the abstract part of philosophy. They speak of "neutral" entities as the stuff out of which both mind and matter are constructed. Thus Holt says: "... perhaps the least dangerous name is neutral-stuff."[13]

Russell goes on to agree with James and in part with the "American realists":

My own belief – for which the reasons will appear in subsequent lectures – is that James is right in rejecting consciousness as an entity, and that the American realists are partly right, though not wholly, in considering that both mind and matter are composed of a neutral-stuff which, in isolation is neither mental nor material.[14]

David Chalmers[15] considers the consciousness of rocks as well as thermostats, although he eschews the notion that rocks are conscious:

I do not think it is strictly accurate to say that rocks (for example) have experiences . . . although rocks may have experiences associated with them. ... Personally, I am much more confident of naturalistic dualism than I am of panpsychism. The latter issue seems to be very much open. But I hope to have said enough to show that we ought to take the possibility of some sort of panpsychism seriously: there seem to be no knockdown arguments against the view, and there are various positive reasons why one might embrace it. (Chalmers 1996:299)

In his 2002 "Consciousness and its Place in Nature", Chalmers carefully considers neutral monism and panpsychism, variants of what he calls "Type-F Monism".[16] He admits that:

The type-F view is admittedly speculative and it can sound strange at first hearing. Many find it extremely counterintuitive to suppose that fundamental physical systems have phenomenal properties: e.g. that there is something it is like to be an electron.[16]