The Church of Scientology has been involved in court disputes in several countries. In some cases, when the Church has initiated the dispute, questions have been raised as to its motives.[1] The Church says that its use of the legal system is necessary to protect its intellectual property and its right to freedom of religion. Critics say that most of the Church's claims are designed to harass Suppressive Persons, people who impede the progress of the Scientology movement.[2][3][4]

In the years since its inception, the Church of Scientology's lawsuits filed against newspapers, magazines, government agencies (including the United States tax collecting unit, the IRS), and individuals have numbered in the thousands. In 1991, Time magazine estimated that the Church spends an average of about $20 million per year on various legal actions,[5] and it is the exclusive client of several law firms. According to a U.S. District Court Memorandum of Decision in 1993, Scientologists "have abused the federal court system by using it, inter alia, to destroy their opponents, rather than to resolve an actual dispute over trademark law or any other legal matter. This constitutes 'extraordinary, malicious, wanton, and oppressive conduct.' ... It is abundantly clear that plaintiffs sought to harass the individual defendants and destroy the church defendants through massive over-litigation and other highly questionable litigation tactics. The Special Master has never seen a more glaring example of bad faith litigation than this."[6] Rulings such as this have classified the Church of Scientology as a chronically vexatious litigant. Legal disputes initiated by Scientology against its former members, the media or others include the following:

In the past, the Church has been involved in criminal court cases (e.g. United States v. Hubbard), but increasingly, lawsuits are being brought by former Church members against the Church, such as:

Scientologists say that the church's main goal is to be recognized as a religion, which on occasion has met resistance from opponents (including national governments), and this has forced it to have recourse to the courts.

One such area is recognition as an official religion in various governments around the world. Scientology's path to legal recognition as a religion in New Zealand took 48 years and several lawsuits.[8] Other efforts have had less success. In 1999, the United Kingdom rejected an application for charity status and the attendant tax benefits.[9] The church applied for Canadian tax-exempt status in 1998,[10] was reportedly rejected in 1999,[11] and is not registered as a charity as of 2009.[12] In Austria, the organization withdrew its application to register as a "religious confessional community".[13] The activities of the Church of Scientology are not prohibited or limited in any way in the European Union and Scientology enjoys the full freedom of any church in these countries.

Some governments, however, have labeled the church as a cult. Although the status is not changed or the freedom is not limited, German[14] and Belgian government entities have accused Scientology of violating the human rights of its members and therefore called it a "totalitarian cult" and a "commercial enterprise". In 1995, a parliamentary report in France classified it, along with 172 other religious groups, as a "dangerous cult."[15] In Russia, the government had refused to consider the church for registration as a religious organization, which became the subject of proceedings before the European Court of Human Rights in the case of Church of Scientology Moscow v. Russia. The court decided that Russia's refusal to consider the Church of Scientology's application for registration as a religious community "had been a violation of Article 11 (freedom of assembly and association) of the European Convention on Human Rights read in the light of Article 9 (freedom of thought, conscience and religion)."

Critics state that the ultimate aim of Scientology lawsuits is to destroy church opponents by forcing them into bankruptcy or submission, using its resources to pursue frivolous lawsuits at considerable cost to defendants. In doing so, they draw particular attention to certain controversial statements made by the church's founder, L. Ron Hubbard, in the 1950s and 1960s.[2][3]

In 1994, Scientology attorney Helena Kobrin was fined $17,775 for filing a frivolous lawsuit.[16] U.S. District Court Judge Leonie Brinkema cited a frequently quoted statement of L. Ron Hubbard on the subject in the case of Religious Technology Center vs. The Washington Post, on November 28, 1995:[17]

The purpose of the suit is to harass and discourage rather than win. The law can be used very easily to harass, and enough harassment on somebody who is simply on the thin edge anyway, well knowing that he is not authorized, will generally be sufficient to cause professional decease. If possible, of course, ruin him utterly.

— L. Ron Hubbard, The Scientologist, a Manual on the Dissemination of Material, 1955

Critics also allege that the Church uses litigation as a cover for intimidation tactics, such as investigating the criminal records (or lack thereof) of opponents and subjecting them to surveillance and invasive inquiries, both to discourage further criticism and to ensure the opponent's unwillingness to fight the lawsuit. A policy letter by L. Ron Hubbard, distributed in early 1966, says:

This is correct procedure:

Don't ever tamely submit to an investigation of us. Make it rough, rough on attackers all the way.[18]

Critics of Scientology cite this passage, among others (such as the widely documented Fair Game doctrine), to support their contentions that the church uses smear tactics to augment the effectiveness of legal threats.[2][3] 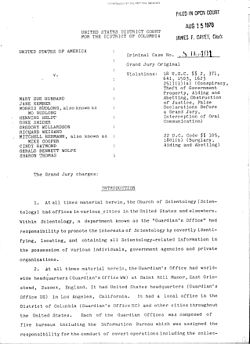 Cases before the European Court of Human Rights

Cases in the United States

[McPherson family attorney Ken] Dandar has persevered through a seemingly endless barrage of legal attacks. There have been nine attempts to disqualify him, and four attempts to remove Lisa's aunt, Dell Liebreich, as executor of Lisa's estate. Scientology attorneys have filed bar complaints against both him and Lirot, lawsuits against Lisa's family, and motions to remove judges and move the case to other venues. When asked how going up against Scientology compares to normal litigation, [First Amendment attorney Luke] Lirot replied, "It's like comparing LSD to orange juice." ... The wrongful death case went through four judges in seven years.[30]

Cases in the UK

In this case, there was ample evidence upon which the jury could properly base their finding of aggravated damages. The existence of the file on Casey Hill under the designation "Enemy Canada" was evidence of the malicious intention of Scientology to "neutralize" him. The press conference was organized in such a manner as to ensure the widest possible dissemination of the libel. Scientology continued with the contempt proceedings although it knew its allegations were false. In its motion to remove Hill from the search warrant proceedings, it implied that he was not trustworthy and might act in those proceedings in a manner that would benefit him in his libel action. It pleaded justification or truth of its statement when it knew it to be false. It subjected Hill to a demeaning cross-examination and, in its address to the jury, depicted Hill as a manipulative actor.[42]

Critical and other sites

https://en.wikipedia.org/wiki/Scientology and law was the original source. Read more.