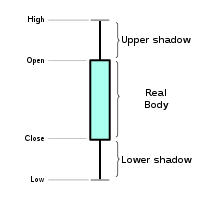 Scheme of a single candlestick chart except the labels "Open" and "Close" are reversed (because a green candle signifies a close that is higher than the open). The Low and High caps are usually not present but may be added to ease reading.

An hourly candlestick shown with order book depth on a currency exchange.

A candlestick chart (also called Japanese candlestick chart) is a style of financial chart used to describe price movements of a security, derivative, or currency. Each "candlestick" typically shows one day, thus a one-month chart may show the 20 trading days as 20 candlesticks.[1] Candlestick charts can also be built using intervals shorter or longer than one day.

It is similar to a bar chart in that each candlestick represents all four important pieces of information for that day: open and close in the thick body; high and low in the “candle wick”. Being densely packed with information, it tends to represent trading patterns over short periods of time, often a few days or a few trading sessions.[2] 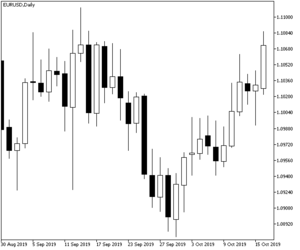 Candlestick charts are most often used in technical analysis of equity and currency price patterns. They are visually similar to box plots, though box plots show different information.[3]

Candlestick charts are thought to have been developed in the 18th century by Munehisa Homma, a Japanese rice trader.[4] They were introduced to the Western world by Steve Nison in his book, Japanese Candlestick Charting Techniques. They are often used today in stock analysis along with other analytical tools such as Fibonacci analysis.[5]

In Beyond Candlesticks,[6] Nison says:

However, based on my research, it is unlikely that Homma used candle charts. As will be seen later, when I discuss the evolution of the candle charts, it was more likely that candle charts were developed in the early part of the Meiji period in Japan (in the late 1800s).

The area between the open and the close is called the real body, price excursions above and below the real body are shadows (also called wicks). Wicks illustrate the highest and lowest traded prices of an asset during the time interval represented. The body illustrates the opening and closing trades.

The price range is the distance between the top of the upper shadow and the bottom of the lower shadow moved through during the time frame of the candlestick.The range is calculated by subtracting the low price from the high price. 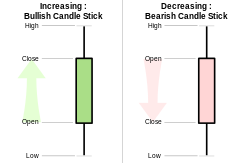 In trading, the trend of the candlestick chart is critical and often shown with colors.

Candlesticks can also show the current price as they're forming, whether the price moved up or down over the time phrase and the price range of the asset covered in that time.

Candlestick charts are a visual aid for decision making in stock, foreign exchange, commodity, and option trading. By looking at a candlestick, one can identify an asset's opening and closing prices, highs and lows, and overall range for a specific time frame.[8] Candlestick charts serve as a cornerstone of technical analysis. For example, when the bar is white and high relative to other time periods, it means buyers are very bullish. The opposite is true when there is a black bar.

A candlestick pattern is a particular sequence of candlesticks on a candlestick chart, which is mainly used to identify trends.

Heikin-Ashi (平均足, Japanese for 'average bar') candlesticks are a weighted version of candlesticks calculated in the following way: [9]

The body of a Heikin-Ashi candle does not always represent the actual open/close. Unlike with regular candlesticks, a long wick shows more strength, whereas the same period on a standard chart might show a long body with little or no wick.

Candlestick chart are similar to box plots. Both show maximum and minimum values. The difference between them is in the information conveyed by the box in between the max and min values.