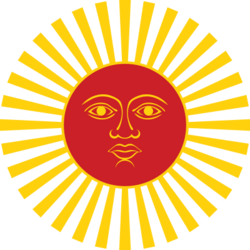 Inti on the flag of Peru, as designed by José Bernardo de Tagle, 1822 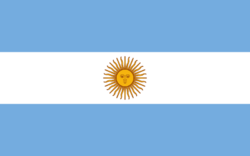 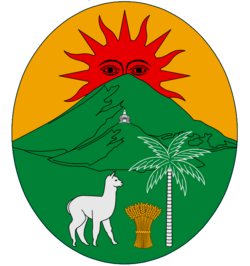 Shield of the coat of arms of Bolivia, with Inti rising above the mountains 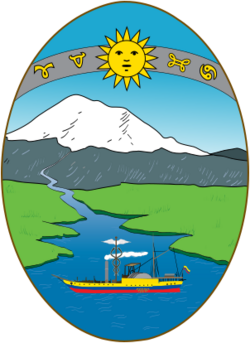 Shield of the coat of arms of Ecuador, with Inti above the land

Inti is the ancient Incan sun god. He is revered as the national patron of the Inca state. Although most consider Inti the sun god, he is more appropriately viewed as a cluster of solar aspects, since the Inca divided his identity according to the stages of the sun.[1] Worshiped as a patron deity of the Inca Empire,[2] Pachacuti is often linked to the origin and expansion of the Inca Sun Cult.[3][4] The most common story says that he is the son of Viracocha, the god of civilization.[5]

Inti and his sister, Mama Killa, the Moon goddess were generally considered benevolent deities. Mama Killa supposedly gave birth to their child. Their court is served by the Rainbow, the Pleiades, Venus, and others. The founding Inca ancestor, known as Manco Cápac, was thought to have been the son of Inti. According to an ancient myth, Inti taught his son Manco Cápac and his daughter Mama Ocllo the arts of civilization and they were sent to earth to pass this. Another legend, however, states Manco Cápac was the son of Viracocha.

Inti ordered his children to build the Inca capital where a divine golden wedge they carried with them would penetrate the earth. Incas believed that this happened in the city of Cusco. The Inca ruler was considered to be the living representative of Inti. Pachacuti is often linked to the origin and expansion of the Inca Sun Cult.[3][6]

The Willaq Umu was the high priest of the Sun (Inti). His position placed him as the second most powerful person in the kingdom. He was directly underneath the Sapa Inca, and they were often brothers. The emperor and his family were believed to be descended from Inti.[7]

A great golden disk representing Inti was captured by the Spanish conquistadors in 1571 and was sent to the pope via Spain. It has since been lost. 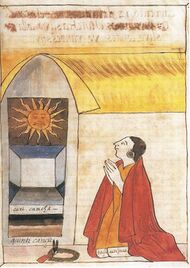 Depiction of Pachacuti worshipping Inti in the Qurikancha

The Inca dedicated many ceremonies to the Sun in order to ensure the Sapa Inca's welfare.[2] The sun was also important to the Incas, particularly the people of the highlands, because it was necessary for the production of crops like maize and other grains.[7] The sun's heat was also thought to cause rain. During the rainy season the sun was hotter and brighter, while during the dry season it was weaker.[8]

The Incas would set aside large quantities of natural and human resources throughout the empire for Inti. Each conquered province was supposed to dedicate a third of their lands and herds to Inti as mandated by the Inca. Each major province would also have a Sun Temple in which male and female priests would serve.[2] The female priests were the mamakuna, who were chosen from the aqllakuna ("chosen women"), and they would weave special cloth and brew chicha for festivities and sacrifices to Inti.[9]

Additionally, the chief temple of the Inca state religion was the Qurikancha in Cusco. Within this temple were wall niches in which the bodies of previous emperors and rulers were exhibited along with various statues of Inti in certain festivals. Some figures of Inti also depicted him in human form with a hollowed out midsection that was filled with a concoction made of gold dust and the ashes of the Inca kings' hearts.[10]

Inti is represented as a golden disk with rays and a human face. Many such disks were supposedly held in Cusco as well as in shrines throughout the empire, especially at Qurikancha, where the most significant image of Inti was discovered by anthropologists. This representation, adorned with ear spools, a pectoral, and a royal headband, was known as punchaw (Quechua for day, also spelled punchao). This image of Inti was also said to have lions and serpents projecting from its form.[11]

The worship of Inti and the rise of the Inti cult are considered to be exploitations of religion for political purposes, since the Inca king was increasingly identified with the sun god. This grew into a form of divine patronage and the convenience of these comparisons for Inca emperors is crucial.[12] 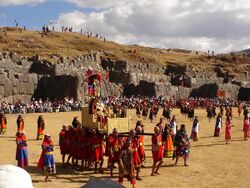 The festival of Inti Raymi honors the sun god and was originally meant to celebrate the start of a new planting season.[13] It now attracts many tourists each year to Cusco, which is [14] the ancient capital of the Inca Empire. The name of the festival, Inti Raymi, translates into "sun festival" [1] and was held during the Southern Hemisphere's winter solstice,[14] which is the shortest day of the year. This fell around June 24 in the Incan Empire.

This festival was attended by the four sectors of Tawantinsuyu. Military captains, government officials, and the vassals who attended were dressed in their best costumes and carried their best weapons and instruments.

Preparation for the festival of Inti Raymi began with a fast of three days, where there were no fires lit and the people abstained from having sexual intercourse. This festival would last for nine days, and during this time the people consumed massive amounts of food and drink.[14] There were many sacrifices as well, which were all performed on the first day. After the nine days everyone would leave with the permission of the Inca.

Corresponding with the three diurnal stages of the sun, Inti's identity is also divided into three primary subcomplexes, which are the father, son, and brother. The first of these is Apu Inti ("supreme Inti"). He represents the father and is sometimes known as "The Lord Sun."[10] The second is Churi Inti, or "Son Inti," who represents the son of Inti and is often known as "Daylight." The third and final division of Inti is Inti Wawqi ("Sun brother", or "Inti brother", also spelled Inti-Guauqui, Inti-Huaoqui). Inti Wawqi also represents the sun god in his specific position as the founding father of Inca reign and the center of the state's official ancestor cult.[1] 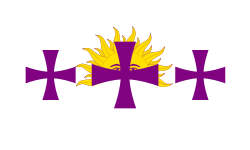 Flag of the Hispanity with Inti rising behind the cross

The sun is also found on the coat of arms of Bolivia and coat of arms of Ecuador, as well as the historical flag of Peru. All these three countries were historically part of the Incan Empire. It is also depicted on the Hispanic flag.

The Sun of May has possibly its roots in Inti as well and can be found on the Flag of Argentina and Flag of Uruguay.