The figures illustrate some of the results and regression types obtainable.

The least squares method applied separately to each segment, by which the two regression lines are made to fit the data set as closely as possible while minimizing the sum of squares of the differences (SSD) between observed (y) and calculated (Yr) values of the dependent variable, results in the following two equations:

The data may show many types or trends,[2] see the figures.

Ya1 and Ya2 are the average values of y in the respective segments.

In the determination of the most suitable trend, statistical tests must be performed to ensure that this trend is reliable (significant).

When no significant breakpoint can be detected, one must fall back on a regression without breakpoint. 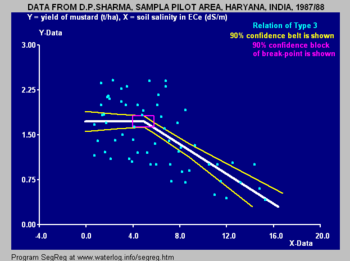 For the blue figure at the right that gives the relation between yield of mustard (Yr = Ym, t/ha) and soil salinity (x = Ss, expressed as electric conductivity of the soil solution EC in dS/m) it is found that:[3] 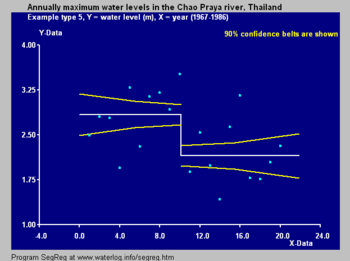 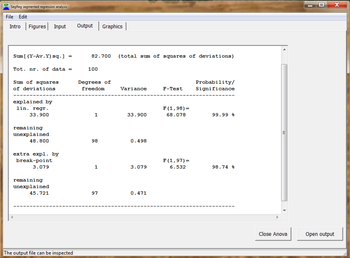 Example of an ANOVA table: in this case the introduction of a break point is highly significant.

The following statistical tests are used to determine the type of trend:

The coefficient of determination for all data (Cd), that is to be maximized under the conditions set by the significance tests, is found from:

where Yr is the expected (predicted) value of y according to the former regression equations and Ya is the average of all y values.

The Cd coefficient ranges between 0 (no explanation at all) to 1 (full explanation, perfect match).
In a pure, unsegmented, linear regression, the values of Cd and Ra2 are equal. In a segmented regression, Cd needs to be significantly larger than Ra2 to justify the segmentation.

The optimal value of the breakpoint may be found such that the Cd coefficient is maximum. 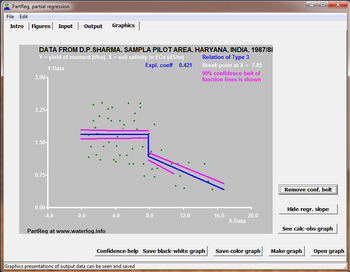 Illustration of a range from X=0 to X=7.85 over which there is no effect.

Segmented regression is often used to detect over which range an explanatory variable (X) has no effect on the dependent variable (Y), while beyond the reach there is a clear response, be it positive or negative. The reach of no effect may be found at the initial part of X domain or conversely at its last part. For the "no effect" analysis, application of the least squares method for the segmented regression analysis [6] may not be the most appropriate technique because the aim is rather to find the longest stretch over which the Y-X relation can be considered to possess zero slope while beyond the reach the slope is significantly different from zero but knowledge about the best value of this slope is not material. The method to find the no-effect range is progressive partial regression [7] over the range, extending the range with small steps until the regression coefficient gets significantly different from zero.

In the next figure the break point is found at X=7.9 while for the same data (see blue figure above for mustard yield), the least squares method yields a break point only at X=4.9. The latter value is lower, but the fit of the data beyond the break point is better. Hence, it will depend on the purpose of the analysis which method needs to be employed.