Ark clam is the common name for a family of small to large-sized saltwater clams or marine bivalve molluscs in the family Arcidae. Ark clams vary both in shape and size. They number about 200 species worldwide.

The group is known as "ark shells" because species such as Arca have a large flat area between the umbones which, in an undamaged shell, somewhat resembles a deck, with the rest of the shell perhaps illustrating an ancient wooden boat such as Noah's ark is thought to have been.

All ark shells have a long straight hinge line with a single row of numerous small and unspecialized "teeth". This is known as a "taxodont dentition" and represents an ancient ancestor. This kind of hinge line is also found in the bivalve families Glycymerididae, Nuculidae and Nuculanidae.

The thick outer skin or periostracum of an ark clam can act as camouflage, such that the shells can sometimes look like stones when lying on the bottom.

Large ark clams, such as Arca zebra, are commonly used as bait, as well as food, throughout the Caribbean.

Some ark clams species, such as the blood cockle (Anadara granosa, a.k.a. Tegillarca granosa) are raised in aquaculture, e.g. in the estuaries of China's Fujian coast.[1]

Tegillarca granosa was used as a food by Indigenous peoples living on the northern Australian coastline through at least the past ~4500 years, with extensive evidence preserved in the form of shell mound sites.[2] 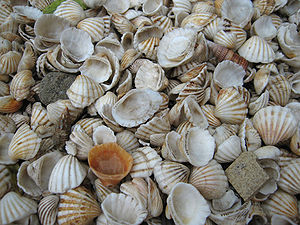 Numerous valves of arcids, genus Senilia, washed up on the beach in Senegal

Genera within the family Arcidae include: