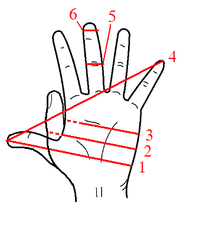 A diagram of various anthropic units derived from the human hand with the thumb in two positions. The palm (3) was originally the width of the human palm but was standardized as the somewhat smaller width of four digits (6). The related shaftment (1) and hand (2) were the width of the palm plus an open or closed thumb. The other units depicted in red are the span (4) and finger (5).

The term anthropic unit (from Greek άνθρωπος meaning human) is used with different meanings in archaeology, in measurement and in social studies.

In archaeology anthropic units are strata or deposits of material containing a high proportion of man-made detritus. For example:[1]

Following the coinage of the term "anthropic principle" by Brandon Carter in 1973–4,[2] units of measurement that are on a human scale are occasionally referred to as "anthropic units", as for example here:[3]

"… the metre and kilogram occupy a reasonably central position as far as symmetry in positive and negative powers of ten is concerned, emphasising that the SI units are natural anthropic units …"

In fields of study such as sociology and ethnography, anthropic units are identifiable groupings of people. For example:[4]

"Ethnographers have been accustomed to deal with the 'race', the 'tribe' and the 'nation' as social or anthropic units …"

"... among the more primitive anthropic units it seems a grave ineptitude for the Chukchees not to adopt the snowhouse building complex from the neighboring Eskimos"