E-Groups are unique architectural complexes found among a number of ancient Maya settlements. They are central components to the settlement organization of Maya sites and could have served as astronomical observatories. The alignment of these structural complexes corresponds to the sun's solstices and equinoxes. 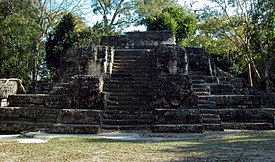 North Face of the Temple of Masks, E Group Uaxactun

Group E view from the top of the temple of masks, Uaxactun.

Origin of the name

E-Groups are named after “Group E” at the Classic period site of Uaxactun, which was the first one documented by Mesoamerican archaeologists.[1] At Uaxactun, the Group E complex consists of a long terraced platform with three supra-structures arranged along a linear axis oriented north-south. The two smaller outlying structures flank the larger central temple. A stairway leads down to a plaza formed by Uaxacatun's Pyramid E-VII. Three stele immediately front the E-Group, and a larger stele is located midway between Group E and Pyramid E-VII. Each of the four stairways incorporated into the complex (the main central one and three leading up to each supra-structure) bears two side masks (for a total of 16).

From a point of observation on Pyramid E-VII, the three structures have the following orientation:

E-Group structures are found at a number of sites across the Maya area, particularly in the lowlands region. The oldest-known E-Groups coincide with the earliest Maya ceremonial sites of the Preclassic period, indicative of the central role played by astronomical and administrative concerns in the very beginnings of Maya ceremonial construction and planning.[2] The oldest documented E-Group is found at the site of Seibal.[3]

Construction of E-groups continues on through the Classic period, with examples of these including the Lost World Pyramid at Tikal in the Petén Basin of northern Guatemala, and Structure 5C-2nd at Cerros, in Belize. Caracol, also in Belize and the site that defeated Tikal during the Middle Classic, has a large-scale E-Group located in the western portion of its central core.