The Jantar Mantar is a collection of nineteen architectural astronomical instruments built by the Kachwaha Rajput king Sawai Jai Singh II, the founder of Jaipur, Rajasthan. The monument was completed in 1734.[1][2] It features the world's largest stone sundial, and is a UNESCO World Heritage site.[1][3] It is located near City Palace and Hawa Mahal.[4] The instruments allow the observation of astronomical positions with the naked eye.[1] The observatory is an example of the Ptolemaic positional astronomy which was shared by many civilizations.[1][2]

The monument features instruments operating in each of the three main classical celestial coordinate systems: the horizon-zenith local system, the equatorial system, and the ecliptic system.[2] The Kapala Yantraprakara is one that works in two systems and allows transformation of the coordinates directly from one system to the other.[5]

The monument was damaged in the 19th century. Early restoration work was undertaken under the supervision of Major Arthur Garrett, a keen amateur astronomer, during his appointment as Assistant State Engineer for the Jaipur District.[6]

Jai Singh noticed that the Zij, which was used for determining the position of celestial objects, did not match the positions calculated on the table. He constructed five new observatories in different cities in order to create a more accurate Zij. The astronomical tables Jai Singh created, known as the Zij-i Muhammad Shahi, was continuously used in India for a century. However, the table had little significance outside of India also it was used to measure time.[8]

Ram Singh (r. 1835-1880) began the restoration of the Jantar Mantar, and completed restoring it in 1876, and even made some of the instruments more durable by inserting the lead into the lines in the instruments, and restoring some of the plaster instruments with stone instead. However, the observatory soon became neglected again, and was not restored until 1901 under Madho Singh II (r. 1880-1922) [8] 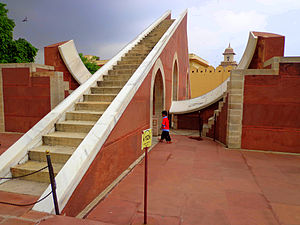 The observatory consists of nineteen instruments for measuring time, predicting eclipses, tracking location of major stars as the earth orbits around the sun, ascertaining the declinations of planets, and determining the celestial altitudes and related ephemerides. The instruments are (alphabetical):[2]

The Vrihat Samrat Yantra, which means the "great king of instruments", is 88 feet (27 m) high; its shadow tells the time of day. Its face is angled at 27 degrees, the latitude of Jaipur. The Hindu chhatri (small cupola) on top is used as a platform for announcing eclipses and the arrival of monsoons.

The instruments are in most cases huge structures. The scale to which they have been built has been alleged to increase their accuracy. However, the penumbra of the sun can be as wide as 30 mm, making the 1mm increments of the Samrat Yantra sundial devoid of any practical significance. Additionally, the masons constructing the instruments had insufficient experience with construction of this scale, and subsidence of the foundations has subsequently misaligned them. The samrat yantra, for instance, which is a sundial, can be used to tell the time to an accuracy of about two seconds in Jaipur local time.[13] The Giant Sundial, known as the Samrat Yantra (The Supreme Instrument) is one of the world's largest sundials, standing 27 metres tall.[14] Its shadow moves visibly at 1 mm per second, or roughly a hand's breadth (6 cm) every minute, which can be a profound experience to watch.

Built from local stone and marble, each instrument carries an astronomical scale, generally marked on the marble inner lining. Bronze tablets, bricks and mortar were also employed in building the instruments in the monument spread over about 18,700 square metres.[2] It was in continuous use until about 1800, then fell in disuse and disrepair.[2] Restored again several times during the British colonial rule, particularly in 1902, the Jantar Mantar was declared a national monument in 1948. It was restored in 2006.[2] The restoration process in early 20th century replaced some of the original materials of construction with different materials.[2]

The telescope in India

Although Jai Singh's observatories did not use telescopes, Jai Singh himself had several which he occasionally used for his observations, and telescopes were being built in India at the time. However, telescopes built at the time were not very accurate for measuring celestial objects. In Europe, the telescope sights were first being used, and increased the accuracy of measuring celestial objects. However, the telescope sight was still a new invention in Europe, and had not yet reached India, and European innovations in Astronomy were only slightly more accurate than the medieval Islamic instruments that Jai Singh had created.[8]

It was used as a filming location for the 2006 film The Fall as a maze.

Storm Thorgerson photographed the sundial for the cover of Shpongle's DVD, Live at the Roundhouse 2008.[18]

It was photographed by Julio Cortázar with the collaboration of Antonio Gálvez for the book Prosa del Observatorio (Editorial Lumen: Barcelona, 1972).