The Orion Molecular Cloud Complex (or, simply, the Orion Complex) is a star forming region with stellar ages ranging up to 12 Myr. Two giant molecular clouds are a part of it, Orion A and Orion B. The stars currently forming within the Complex are located within these clouds. A number of other somewhat older stars no longer associated with the molecular gas are also part of the Complex, most notably the Orion's Belt (Orion OB1b), as well as the dispersed population north of it (Orion OB1a). Near the head of Orion there is also a population of young stars that is centered on Meissa. The Complex is between 1 000 and 1 400 light-years away, and hundreds of light-years across.

The Orion Complex is one of the most active regions of nearby stellar formation visible in the night sky, and is home to both protoplanetary discs and very young stars. Much of it is bright in infrared wavelengths due to the heat-intensive processes involved in stellar formation, though the complex contains dark nebulae, emission nebulae, reflection nebulae, and H II regions. The presence of ripples on the surface of Orion's Molecular Clouds was discovered in 2010. The ripples are a result of the expansion of the nebulae gas over pre-existing molecular gas.[2]

The Orion Complex includes a large group of bright nebulae, dark clouds in the Orion constellation. Several nebulae can be observed through binoculars and small telescopes, and some parts (such as the Orion Nebula) are visible to the naked eye.

Nebulae within the complex 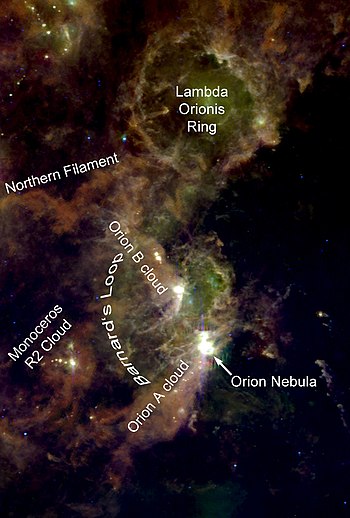 A labeled map of the Orion Molecular Cloud, with the images taken by IRAS and various telescopes that mapped CO in this part of the sky

The following is a list of notable regions within the larger Complex:

The giant molecular cloud Orion A is the most active star-forming region in the local neighbourhood of the Sun. In the last few million years about 3000 young stellar objects were formed in this region, including about 190 protostars and about 2600 pre-main sequence stars.[6] The Orion A cloud has a mass in the order of 105 M☉.[7] The stars in Orion A do not have the same distance to us. The "head" of the cloud, which also contains the Orion Nebula is about 1300 light-years (400 parsecs) away from the Sun. The "tail" however is up to 1530 light-years (470 parsecs) away from the Sun. The Orion A cloud is therefore longer than the projected length of 130 light-years (40 parsecs) and has a true length of 290 light-years (90 parsecs).[8]

Orion B is about 1370 light-years (420 parsecs) from Earth.[9] It has a size of about 1.5 kpc² and a mass in the order of 105 M☉. It contains several star forming regions with the star cluster inside the Flame Nebula being the largest cluster.[10][7]

Parts of the Orion-Eridanus superbubble were first seen as Barnard's Loop in Hydrogen-alpha images that warp around the eastern portion of Orion. The other part of the superbubble that is seen in H-alpha is the Eridanus Loop. The walls of the entire bubble are seen in far-infrared and HI. Some features of the Eridanus Loop might be as close as 590 light-years (180 parsecs) to the sun.[7]