The asynchronous array of simple processors (AsAP) architecture comprises a 2-D array of reduced complexity programmable processors with small scratchpad memories interconnected by a reconfigurable mesh network. AsAP was developed by researchers in the VLSI Computation Laboratory (VCL) at the University of California, Davis and achieves high performance and energy-efficiency, while using a relatively small circuit area. It was made in 2006.[1]

AsAP processors are well suited for implementation in future fabrication technologies, and are clocked in a globally asynchronous locally synchronous (GALS) fashion. Individual oscillators fully halt (leakage only) in 9 cycles when there is no work to do, and restart at full speed in less than one cycle after work is available. The chip requires no crystal oscillators, phase-locked loops, delay-locked loops, global clock signal, or any global frequency or phase-related signals whatsoever.

Block diagrams of a single AsAP processor and the 6x6 AsAP 1.0 chip

AsAP uses several novel key features, of which four are: 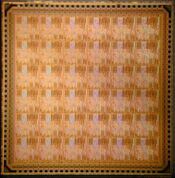 A chip containing 36 (6x6) programmable processors was taped-out in May 2005 in 0.18 μm CMOS using a synthesized standard cell technology and is fully functional. Processors on the chip operate at clock rates from 520 MHz to 540 MHz at 1.8V and each processor dissipates 32 mW on average while executing applications at 475 MHz. 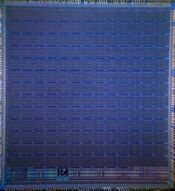 A second generation 65 nm CMOS design contains 167 processors with dedicated fast Fourier transform (FFT), Viterbi decoder, and video motion estimation processors; 16 KB shared memories; and long-distance inter-processor interconnect. The programmable processors can individually and dynamically change their supply voltage and clock frequency. The chip is fully functional. Processors operate up to 1.2 GHz at 1.3 V which is believed to be the highest clock rate fabricated processor designed in any university. At 1.2 V, they operate at 1.07 GHz and 47 mW when 100% active. At 0.675 V, they operate at 66 MHz and 608 μW when 100% active. This operating point enables 1 trillion MAC or arithmetic logic unit (ALU) ops/sec with a power dissipation of only 9.2 watts. Due to its MIMD architecture and fine-grain clock oscillator stalling, this energy efficiency per operation is almost perfectly constant across widely varying workloads, which is not the case for many architectures.