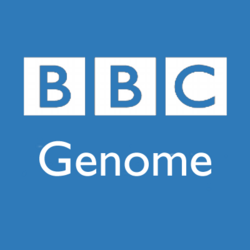 The BBC Genome Project is a digitised, searchable database of programme listings initially based upon the contents of the Radio Times from the first issue in 1923, to 2009.[1] TV listings post 2009 can be accessed via BBC Programmes site

BBC Genome is not the BBC's first online searchable database; in April 2006 the BBC gave the public access to Infax, the BBC's programme database at the time. Infax contained around 900,000 entries, but not every programme ever broadcast, and it ceased operation in December 2007.[2] The front page of the website is still available to see via the Internet Archive here. After Infax ceased, a message on the website said that it would be incorporating in the information into individual programme pages.[3] In 2012, it was replaced by the database Fabric but this is only for internal use within the BBC.

Screenshot of an OCR error (since corrected) in Genome. The text, "Uza TarbuclC's Christmas", should read "Liza Tarbuck's Christmas".

In December 2012, the BBC completed a digitisation exercise, scanning the listings from Radio Times of all BBC programmes 1923-2009 from an entire run of about 4,500 copies of the magazine.[4] They identified around five million programmes, involving 8.5 million actors, presenters, writers and technical staff.[4] The listings are as published, in advance, and so do not include late changes or cancellations which were reflected on Infax. However, they do include huge numbers of early radio and television broadcasts, and "DJ shows" from BBC Radio 1 and BBC Radio 2 which were rarely kept officially, which were not listed on Infax (which also did not usually include repeats of archived programmes prior to 1976) because they were not in the BBC archives.

The issues were scanned at high resolution, producing TIF images and Optical Character Recognition (OCR) was then used to turn the text from the page into searchable text on the Genome database.[1]

The aim of this project is to allow researchers to be able to find out information easier and to help BBC Archives to build up a picture of what exists and what is currently missing from the archive.[7][8] Corrections to OCR errors and changes to advertised schedules are being crowdsourced,[5] with over 285,000 user generated edits accepted after editorial review as of mid-December 2017.[9][10]

Each listing entry has a unique identifier which may be expressed as a URL. For example, the very first screening of Doctor Who is http://genome.ch.bbc.co.uk/8f81c193ba224e84981f353cae480d49. A broadcast programme may have more than one such identifier, if it was broadcast (and thus listed) on repeat occasions, or in different regions.