Short description: Range of frequencies occupied by an unmodulated signal 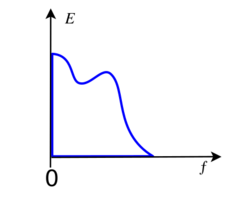 Spectrum of a baseband signal, energy E per unit frequency as a function of frequency f. The total energy is the area under the curve.

In telecommunications and signal processing, baseband is the range of frequencies occupied by a signal that has not been modulated to higher frequencies.[1] Baseband signals typically originate from transducers, converting some other variable into an electrical signal. For example, the output of a microphone is a baseband signal that is an analog of the applied voice audio. In conventional analog radio broadcasting the baseband audio signal is used to modulate an RF carrier signal at a much higher frequency.

A baseband signal may have frequency components going all the way down to DC, or at least it will have a high ratio bandwidth. A modulated baseband signal is called a passband signal. This occupies a higher range of frequencies and has a lower ratio and fractional bandwidth.

A baseband signal or lowpass signal is a signal that can include frequencies that are very near zero, by comparison with its highest frequency (for example, a sound waveform can be considered as a baseband signal, whereas a radio signal or any other modulated signal is not).[2]

A baseband channel or lowpass channel (or system, or network) is a communication channel that can transfer frequencies that are very near zero.[4] Examples are serial cables and local area networks (LANs), as opposed to passband channels such as radio frequency channels and passband filtered wires of the analog telephone network. Frequency division multiplexing (FDM) allows an analog telephone wire to carry a baseband telephone call, concurrently as one or several carrier-modulated telephone calls.

The word "BASE" in Ethernet physical layer standards, for example 10BASE5, 100BASE-TX and 1000BASE-SX, implies baseband digital transmission (i.e. that a line code and an unfiltered wire are used).[8][9]

A baseband processor also known as BP or BBP is used to process the down-converted digital signal to retrieve essential data for a wireless digital system. The baseband processing block in GNSS receivers is responsible for providing observable data: that is, code pseudo-ranges and carrier phase measurements, as well as navigation data. [7]

where [math]\displaystyle{ \omega }[/math] is the carrier angular frequency in rad/s.[10]

A signal at baseband is often used to modulate a higher frequency carrier signal in order that it may be transmitted via radio. Modulation results in shifting the signal up to much higher frequencies (radio frequencies, or RF) than it originally spanned. A key consequence of the usual double-sideband amplitude modulation (AM) is that the range of frequencies the signal spans (its spectral bandwidth) is doubled. Thus, the RF bandwidth of a signal (measured from the lowest frequency as opposed to 0 Hz) is twice its baseband bandwidth. Steps may be taken to reduce this effect, such as single-sideband modulation. Conversely, some transmission schemes such as frequency modulation use even more bandwidth.

The figure below shows AM modulation:

Comparison of the equivalent baseband version of a signal and its AM-modulated (double-sideband) RF version, showing the typical doubling of the occupied bandwidth.