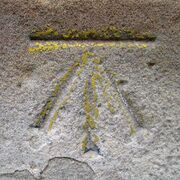 An Ordnance Survey cut mark in the UK

Occasionally a non-vertical face, and a slightly different mark, was used

The term benchmark, bench mark, or survey benchmark originates from the chiseled horizontal marks that surveyors made in stone structures, into which an angle-iron could be placed to form a "bench" for a leveling rod, thus ensuring that a leveling rod could be accurately repositioned in the same place in the future. These marks were usually indicated with a chiseled arrow below the horizontal line.

The term is generally applied to any item used to mark a point as an elevation reference. Frequently, bronze or aluminum disks are set in stone or concrete, or on rods driven deeply into the earth to provide a stable elevation point. If an elevation is marked on a map, but there is no physical mark on the ground, it is a spot height.

The terms "height" and "elevation" are often used interchangeably, but in many jurisdictions they have specific meanings; "height" commonly refers to a local or relative difference in the vertical (such as the height of a building), whereas "elevation" refers to the difference from a nominated reference surface (such as sea-level, or a mathematical/geodetic model that approximates the sea level known as the geoid). Elevation may be specified as normal height (above a reference ellipsoid), orthometric height, or dynamic height which have slightly different definitions.

Other types of survey marks 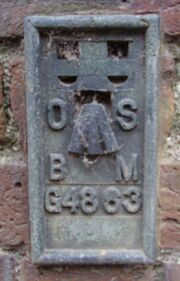 Triangulation points, also known as trig points, are marks with a precisely established horizontal position. These points may be marked by disks similar to benchmark disks, but set horizontally, and are also sometimes used as elevation benchmarks. Prominent features on buildings such as the tip of a church spire or a chimney stack are also used as reference points for triangulation. In the United Kingdom triangulation points are often set in large concrete markers that, as well as functioning as triangulation points, have a benchmark set into the side. With the increasing use of GPS and electronic distance measuring devices, the same techniques and equipment are used to fix the horizontal and vertical position of a survey marker at the same moment, and therefore the marks are usually regarded as "fixed in three dimensions".

Benchmarks are typically placed ("monumented") by a government agency or private survey firm, and many governments maintain a register of these marks so that the records are available to all. These records are usually in the form of a geographically searchable database (computer or map-based), with links to sketches, diagrams, photos of the marks, and any other technical details.

Government agencies that place and maintain records of benchmarks include: