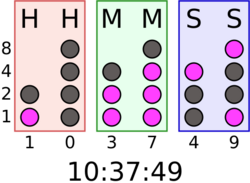 Reading a binary-coded decimal clock: Add the values of each column of LEDs to get six decimal digits. There are two columns each for hours, minutes and seconds. 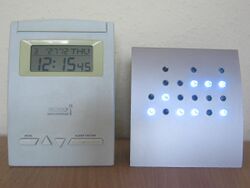 Most common binary clocks use six columns of LEDs to represent zeros and ones. Each column represents a single decimal digit, a format known as binary-coded decimal (BCD). The bottom row in each column represents 1 (or 20), with each row above representing higher powers of two, up to 23 (or 8).

To read each individual digit in the time, the user adds the values that each illuminated LED represents, then reads these from left to right. The first two columns represent the hour, the next two represent the minute and the last two represent the second. Since zero digits are not illuminated, the positions of each digit must be memorized if the clock is to be usable in the dark. 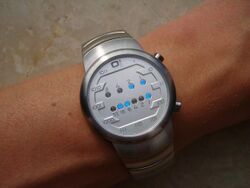 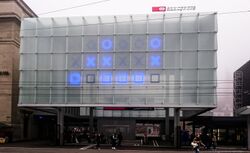 Binary large-scale electronic clock to indicate the time of day on 3 lines in hours, minutes, seconds on the face of the main railway station in St. Gallen, Switzerland. Time indicated is 9 o'clock 25 minutes 46 seconds.

A format exists also where hours, minutes and seconds are shown on three lines instead of columns as binary numbers.[1]

Less commonly, the day could be divided in binary fractions, such as ½ day, ¼ day, etc. The clock would show the time in 16 bits, where the smallest unit would be exactly ​1⁄65536 day, or ​675⁄512 (about 1.318) seconds.[2] An analog format also exists of this type.[3] However, it is much easier to write and express this in hexadecimal, which would be hexadecimal time.