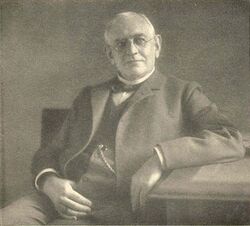 He was born at Langenhorn (Schleswig) and educated at the Gymnasium Christianeum, the University of Erlangen, and the University of Berlin. He completed his doctoral thesis under Friedrich Adolf Trendelenburg at Berlin in 1871, he habilitated there in 1875, and he became extraordinary professor of philosophy and pedagogy there in 1878. In 1896 he succeeded Eduard Zeller as professor of moral philosophy at Berlin.

He was the greatest of the pupils of Gustav Theodor Fechner, to whose doctrine of panpsychism he gave great prominence by his Einleitung in die Philosophie (1892; 7th ed., 1900; Eng. trans., 1895). He went, however, considerably beyond Fechner in attempting to give an epistemological account of the knowledge of the psychophysical. Admitting Immanuel Kant's hypothesis that by inner sense we are conscious of mental states only, he holds that this consciousness constitutes a knowledge of the thing-in-itself which Kant denies. Soul is, therefore, a practical reality which Paulsen, with Arthur Schopenhauer, regards as known by the act of will. But this will is neither rational desire, unconscious irrational will, nor conscious intelligent will, but an instinct, a will to live (Zielstrebigkeit), often subconscious, pursuing ends, indeed, but without reasoning as to means. This conception of will, though consistent and convenient to the main thesis, must be rigidly distinguished from the ordinary significance of will, i.e. rational desire.[1]

Paulsen is almost better known for his educational writings than as a pure philosopher, including his German Education, Past and Present (Eng. trans., by I. Lorenz, 1907).

Among his other works are: