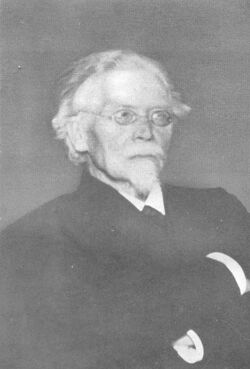 Gerardus Heymans (17 April 1857, Ferwert – 18 February 1930, Groningen) was a Dutch philosopher, psychologist, a follower of Gustav Fechner's idea of psychic monism, and from 1890 to 1927 a professor at Groningen University.[1] His thought was influenced by the work of the Russian philosopher Afrikan Spir.[2][note 1]

Heymans studied law and philosophy in Leiden University under Jan Pieter Land, Simon Vissering and Joannes Buys. He passed his exams in public law on 23 October 1879 and on 29 June 1880 he was awarded a PhD on a dissertation in Political Economics "Karakter en methode der staathuishoudkunde". He continued his philosophical studies in Germany where a year later he earned a second D.Phil. degree on a subject on ethics.[3]

In 1900 he became member of the Royal Netherlands Academy of Arts and Sciences, he resigned in 1919.[4]

Heymans was a noted opponent of Albert Einstein's theory of relativity.[5] Heymans promoted a philosophy of "psychic monism" (a form of panpsychism) in which consciousness is the fundamental reality of existence.[6][7]

His student Johannes Jacobus Poortman could not agree with his monistic point of view and formulated the concept of hylic pluralism (in Dutch hylisch pluralisme).

On June 11, 1944, the Heymans-Genootschap, an organisation for the continuation of his work, was established. 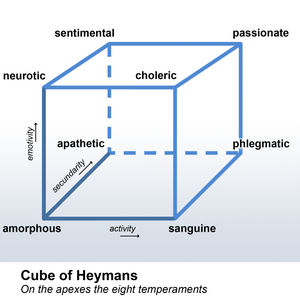 The cube of Heymans is a description of a personality classification by Gerard Heymans.

Inspired by Ernst Kretschmer and by Jung, he created a personality (or temperament) classification based on a cube with three axes:

This cube gives rise to eight temperaments at its apexes (names for which were inspired by Greek philosophers and physicians such as Galen and Hippocrates):

This typology was widely used in Dutch-speaking countries, but has been superseded by more modern typologies.