Captain John Henry Ebersole, M.D., MC USN (26 January 1925 – 23 September 1993) was a pioneer in submarine medicine and radiation oncology, selected by Admiral Hyman G. Rickover to serve as medical officer aboard the US Navy's first two nuclear powered submarines, the USS Nautilus and the USS Seawolf. He was the radiologist for NASA that screened the Mercury Seven astronauts for Project Mercury. Ebersole was the radiologist responsible for the x-rays taken during the autopsy of John F. Kennedy on 22 November 1963 at Bethesda Naval Medical Center.

Ebersole was born in 1925 at Sterling, Illinois. He grew up in northwestern Illinois. On 21 October 1948, John H. Ebersole, physician applied for a marriage license to wed Marion E. Sherwood, nurse. The couple were married on 30 October 1948 at St. Vincent de Paul church by Reverend M.J. Rouck in Bedford, Indiana. Ebersole was the son of Noah Ebersole, auto mechanic and Geraldine Kathryn McCormick, housewife. Marion was the daughter of Samuel J. Sherwood, estimator and Maybelle Elizabeth Lehay.[1]

Ebersole served for 24 years in the U.S. Navy Medical Corps. He was the first officer to serve aboard two nuclear submarines, the USS Nautilus and the USS Seawolf, being selected by Admiral Hyman G. Rickover as the medical officer for the crew. He worked with NASA on Project Mercury. Ebersole was assigned to Bethesda Naval Medical Center and was the radiologist for the autopsy of President John F. Kennedy. He was chief of radiation therapy, training director for nuclear medicine, and director of the Radiation Exposure Evaluation Laboratory. He became chief of diagnostic radiology and chief of radiology. After retirement from the Navy, Ebersole settled in Lancaster, Pennsylvania where he established and directed the John Hale Steinman Cancer Center at Lancaster General Hospital. Upon retirement from medical practice, Ebersole pursue a lifelong passion in mystery novels and crime fiction. He traveled to England and attended conferences at Oxford University. He became adjunct faculty at Franklin and Marshall College and taught a detective fiction course in the EtCetera program. He was a founding member of the Orange Street Improbables, a group of mystery enthusiasts.[2]

In 1993, Ebersole died at home after a brief illness at Lancaster, Pennsylvania. He was buried at Arlington National Cemetery, in plot: Sec: 8, Site: 9473.[3]

Ebersole completed his undergraduate studies at Saint Ambrose College in Davenport, Iowa. In 2013, he was posthumously inducted into the Newman Central Catholic High School Hall of Fame at Sterling, Illinois.[4] He attended Indiana University and graduated in 1948. He received the M.D. from Indiana University at the age 23.[2][5]

On 26 September 1957, President Dwight D. Eisenhower boarded the USS Seawolf at Narragansett Bay and was greeted by skipper Commander Richard B. Lanning and Rear Admiral Frederick B. Warder, Atlantic Fleet submarine force commander.[8] The President was briefed by Ebersole regarding radiation exposure aboard the Seawolf. According to the New York Times report:

The President was briefed about controlled radiation exposure aboard nuclear-powered submarines. He received a film patch to wear and a tiny dosimeter to read. The medical officer, Lieutenant Commander John E. Ebersole of Sterling, Illinois, explained to the President that submariners in the new type craft get an average radiation dosage of about 200 milliroentgens a year, compared with an allowable industrial dose of about 300 a week. As he left the boat, the President jokingly told Admiral Warder to check on his film patch and "let me know if I had too much radiation." "I assure you, you won't have," the Admiral said."[9] 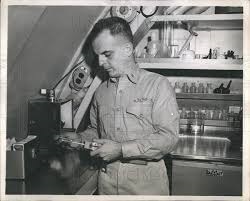 Ebersole aboard the Seawolf.

During his tour, the Seawolf set a new record of submergence for 60 days under the command of Captain Richard Boyer Laning. Captain Laning and the Seawolf crew were greeted upon return to port at New London, Connecticut by Rear Admiral Hyman G. Rickover.[10]

Eventually, the Navy established a routine training program for what would be called Nuke School. The coursework for officers to be assigned to nuclear submarines and ships began at Reed College in Oregon with 24 weeks of training. Then they received 6 weeks of field training at the Atomic Energy Commission's Hanford plutonium production facilities in Washington. Next the candidates spent 5 weeks at the Nevada Test Site and the Sandia nuclear weapons laboratory in New Mexico. They finished up with 6 weeks of additional training at the Walter Reed Laboratory in Maryland.[11]