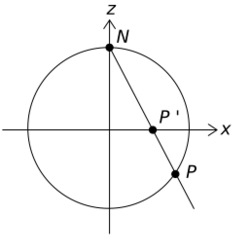 The circle is birationally equivalent to the line. One birational map between them is stereographic projection, pictured here.

In mathematics, birational geometry is a field of algebraic geometry in which the goal is to determine when two algebraic varieties are isomorphic outside lower-dimensional subsets. This amounts to studying mappings that are given by rational functions rather than polynomials; the map may fail to be defined where the rational functions have poles.

Birational equivalence of a plane conic

which has a rational inverse g: X ⇢ [math]\displaystyle{ \mathbb{A}^1 }[/math] given by

Applying the map f with t a rational number gives a systematic construction of Pythagorean triples.

More generally, a smooth quadric (degree 2) hypersurface X of any dimension n is rational, by stereographic projection. (For X a quadric over a field k, X must be assumed to have a k-rational point; this is automatic if k is algebraically closed.) To define stereographic projection, let p be a point in X. Then a birational map from X to the projective space [math]\displaystyle{ \mathbb{P}^n }[/math] of lines through p is given by sending a point q in X to the line through p and q. This is a birational equivalence but not an isomorphism of varieties, because it fails to be defined where q = p (and the inverse map fails to be defined at those lines through p which are contained in X).

Minimal models and resolution of singularities

This leads to the idea of minimal models: is there a unique simplest variety in each birational equivalence class? The modern definition is that a projective variety X is minimal if the canonical line bundle KX has nonnegative degree on every curve in X; in other words, KX is nef. It is easy to check that blown-up varieties are never minimal.

This notion works perfectly for algebraic surfaces (varieties of dimension 2). In modern terms, one central result of the Italian school of algebraic geometry from 1890–1910, part of the classification of surfaces, is that every surface X is birational either to a product [math]\displaystyle{ \mathbb{P}^1\times C }[/math] for some curve C or to a minimal surface Y.[1] The two cases are mutually exclusive, and Y is unique if it exists. When Y exists, it is called the minimal model of X.

One useful set of birational invariants are the plurigenera. The canonical bundle of a smooth variety X of dimension n means the line bundle of n-forms KX = Ωn, which is the nth exterior power of the cotangent bundle of X. For an integer d, the dth tensor power of KX is again a line bundle. For d ≥ 0, the vector space of global sections H0(X, KXd) has the remarkable property that a birational map f : X ⇢ Y between smooth projective varieties induces an isomorphism H0(X, KXd) ≅ H0(Y, KYd).[2]

For d ≥ 0, define the dth plurigenus Pd as the dimension of the vector space H0(X, KXd); then the plurigenera are birational invariants for smooth projective varieties. In particular, if any plurigenus Pd with d > 0 is not zero, then X is not rational.

Summands of ⊗kΩ1 and some Hodge numbers

More generally, for any natural summand

of the r-th tensor power of the cotangent bundle Ω1 with r ≥ 0, the vector space of global sections H0(X, E(Ω1)) is a birational invariant for smooth projective varieties. In particular, the Hodge numbers

The fundamental group π1(X) is a birational invariant for smooth complex projective varieties.

The "Weak factorization theorem", proved by Abramovich, Karu, Matsuki, and Włodarczyk (2002), says that any birational map between two smooth complex projective varieties can be decomposed into finitely many blow-ups or blow-downs of smooth subvarieties. This is important to know, but it can still be very hard to determine whether two smooth projective varieties are birational.

A projective variety X is called minimal if the canonical bundle KX is nef. For X of dimension 2, it is enough to consider smooth varieties in this definition. In dimensions at least 3, minimal varieties must be allowed to have certain mild singularities, for which KX is still well-behaved; these are called terminal singularities.

That being said, the minimal model conjecture would imply that every variety X is either covered by rational curves or birational to a minimal variety Y. When it exists, Y is called a minimal model of X.

Minimal models are not unique in dimensions at least 3, but any two minimal varieties which are birational are very close. For example, they are isomorphic outside subsets of codimension at least 2, and more precisely they are related by a sequence of flops. So the minimal model conjecture would give strong information about the birational classification of algebraic varieties.

The conjecture was proved in dimension 3 by Mori.[3] There has been great progress in higher dimensions, although the general problem remains open. In particular, Birkar, Cascini, Hacon, and McKernan (2010)[4] proved that every variety of general type over a field of characteristic zero has a minimal model.

A variety is called uniruled if it is covered by rational curves. A uniruled variety does not have a minimal model, but there is a good substitute: Birkar, Cascini, Hacon, and McKernan showed that every uniruled variety over a field of characteristic zero is birational to a Fano fiber space.[lower-alpha 1] This leads to the problem of the birational classification of Fano fiber spaces and (as the most interesting special case) Fano varieties. By definition, a projective variety X is Fano if the anticanonical bundle [math]\displaystyle{ K_X^* }[/math] is ample. Fano varieties can be considered the algebraic varieties which are most similar to projective space.

Birational geometry has found applications in other areas of geometry, but especially in traditional problems in algebraic geometry.