In a dynamical system, bistability means the system has two stable equilibrium states.[1] Something that is bistable can be resting in either of two states. An example of a mechanical device which is bistable is a light switch. The switch lever is designed to rest in the "on" or "off" position, but not between the two. Bistable behavior can occur in mechanical linkages, electronic circuits, nonlinear optical systems, chemical reactions, and physiological and biological systems.

In a conservative force field, bistability stems from the fact that the potential energy has two local minima, which are the stable equilibrium points.[2] These rest states need not have equal potential energy. By mathematical arguments, a local maximum, an unstable equilibrium point, must lie between the two minima. At rest, a particle will be in one of the minimum equilibrium positions, because that corresponds to the state of lowest energy. The maximum can be visualized as a barrier between them.

Bistability is widely used in digital electronics devices to store binary data. It is the essential characteristic of the flip-flop, a circuit widely used in latches and some types of semiconductor memory. A bistable device can store one bit of binary data, with one state representing a "0" and the other state a "1". It is also used in relaxation oscillators, multivibrators, and the Schmitt trigger. Optical bistability is an attribute of certain optical devices where two resonant transmissions states are possible and stable, dependent on the input. Bistability can also arise in biochemical systems, where it creates digital, switch-like outputs from the constituent chemical concentrations and activities. It is often associated with hysteresis in such systems.

In the mathematical language of dynamic systems analysis, one of the simplest bistable systems is

The appearance of a bistable region can be understood for the model system [math] \frac{dy}{dt} = y (r-y^2) [/math] which undergoes a supercritical pitchfork bifurcation with bifurcation parameter [math] r [/math].

In biological and chemical systems 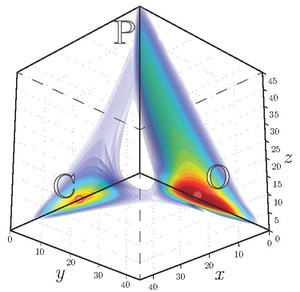 Bistability is key for understanding basic phenomena of cellular functioning, such as decision-making processes in cell cycle progression, cellular differentiation,[5] and apoptosis. It is also involved in loss of cellular homeostasis associated with early events in cancer onset and in prion diseases as well as in the origin of new species (speciation).[6]

Bistability can be modified to be more robust and to tolerate significant changes in concentrations of reactants, while still maintaining its "switch-like" character. Feedback on both the activator of a system and inhibitor make the system able to tolerate a wide range of concentrations. An example of this in cell biology is that activated CDK1 (Cyclin Dependent Kinase 1) activates its activator Cdc25 while at the same time inactivating its inactivator, Wee1, thus allowing for progression of a cell into mitosis. Without this double feedback, the system would still be bistable, but would not be able to tolerate such a wide range of concentrations.[10]

Bistability has also been described in the embryonic development of Drosophila melanogaster (the fruit fly). Examples are anterior-posterior [11] and dorso-ventral [12][13] axis formation and eye development.[14]

A prime example of bistability in biological systems is that of Sonic hedgehog (Shh), a secreted signaling molecule, which plays a critical role in development. Shh functions in diverse processes in development, including patterning limb bud tissue differentiation. The Shh signaling network behaves as a bistable switch, allowing the cell to abruptly switch states at precise Shh concentrations. gli1 and gli2 transcription is activated by Shh, and their gene products act as transcriptional activators for their own expression and for targets downstream of Shh signaling.[15] Simultaneously, the Shh signaling network is controlled by a negative feedback loop wherein the Gli transcription factors activate the enhanced transcription of a repressor (Ptc). This signaling network illustrates the simultaneous positive and negative feedback loops whose exquisite sensitivity helps create a bistable switch.

Bistability can only arise in biological and chemical systems if three necessary conditions are fulfilled: positive feedback, a mechanism to filter out small stimuli and a mechanism to prevent increase without bound.[6]

Bistable chemical systems have been studied extensively to analyze relaxation kinetics, non-equilibrium thermodynamics, stochastic resonance, as well as climate change.[6] In bistable spatially extended systems the onset of local correlations and propagation of traveling waves have been analyzed.[16][17]

Bistability is often accompanied by hysteresis. On a population level, if many realisations of a bistable system are considered (e.g. many bistable cells (speciation)[18]), one typically observes bimodal distributions. In an ensemble average over the population, the result may simply look like a smooth transition, thus showing the value of single-cell resolution.

A specific type of instability is known as modehopping, which is bi-stability in the frequency space. Here trajectories can shoot between two stable limit cycles, and thus show similar characteristics as normal bi-stability when measured inside a Poincare section.

Bistability is the ability of a material to present in two stable phases that can both exist within a given range of temperatures but above and below that range only one or the other phase exists.

Bistability as applied in the design of mechanical systems is more commonly said to be "over centre"—that is, work is done on the system to move it just past the peak, at which point the mechanism goes "over centre" to its secondary stable position. The result is a toggle-type action- work applied to the system below a threshold sufficient to send it 'over center' results in no change to the mechanism's state.

Springs are a common method of achieving an "over centre" action. A spring attached to a simple two position ratchet-type mechanism can create a button or plunger that is clicked or toggled between two mechanical states. Many ballpoint and rollerball retractable pens employ this type of bistable mechanism.

An even more common example of an over-center device is an ordinary electric wall switch. These switches are often designed to snap firmly into the "on" or "off" position once the toggle handle has been moved a certain distance past the center-point.

A ratchet in action. Each tooth in the ratchet together with the regions to either side of it constitutes a simple bistable mechanism.