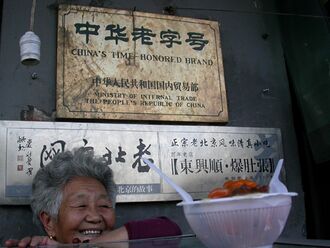 A Lao Zihao in Houhai.

China Time-honored Brand (Chinese: Zhonghua lao zihao 中华老字号 or simply lao zihao 老字号) is a title granted by the Ministry of Commerce of the People's Republic of China to Chinese enterprises that existed before 1956, sell products, techniques or services passed down through generations, have distinct Chinese cultural characteristics and are widely recognized by society.[1]

This title was first granted soon after the foundation of the PRC in 1949.[2] The current eligibility criteria were set in 2006, when the Ministry of Commerce revised them for the last time.[2]

There are currently around 1,000 brands granted this title, among which are Tongrentang (traditional Chinese medicine), Quanjude (Peking Duck) and Go Believe (baozi or steamed dumpling). Many of the shops have a history of over 400 years, and in modern times have begun to expand via mass commercialization of their products.