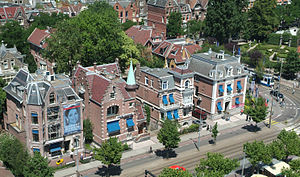 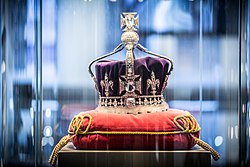 Replica of the crown of the British Queen Mother Elizabeth, which holds the Koh-i-Noor diamond

Royal Coster Diamonds is the oldest, still operating, diamond polishing factory in the world, located in Amsterdam, Netherlands. Founded in 1840, they have handled a few historical masterpieces. For example, they re-polished the Koh i Noor, which is mounted in the Crown of Queen Mary,[1] and the Dresden Green Diamond, held in the New Green Vault at Dresden Castle.

The watch of Queen Juliana

In 1852, Mr J.A. Feder and Mr L.B. Voorzanger, both diamond polishers at Royal Coster Diamonds, went to London to re-polish the famous Koh-i Noor. Mr J.A. Fedder died in 1864. Louis Benjamin Voorzanger won the silver medal for his achievements at the World Exhibition in Paris in 1855. He also polished the “famous diamond Star of the South”. He died in 1886. The family of the deceased diamond polisher still owns the silver plates with the inscription of this price for the diamond polishers, who polished the Koh-i Noor.

In 1959, Ben Meier polished the many diamonds which were set in a white gold watch, which was presented to Queen Juliana by the Dutch people. Between 1991 and 1994 Pauline Willemse, a diamond polisher at Royal Coster Diamonds, polished the smallest diamond in the world. This is a brilliant cut stone with 57 facets, weighing 0.0000743 carats (0.01486 mg). 0.16–0.17 mm in diameter and with a height of 0.11 mm. This event was published in the Guinness Book of Records. This and other famous diamonds are on display at Royal Coster Diamonds and can be seen during a diamond tour through the polishing factory.