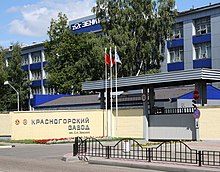 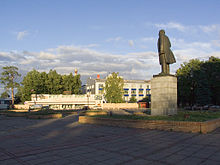 Opticians' Square in Krasnogorsk, with KMZ buildings in the background

During the Soviet period it was called Krasnogorsk Mechanical Works (Красногорский механический завод, Krasnogorskiy Mechanicheskiy Zavod). The abbreviation KMZ (КМЗ) is still in common use.

KMZ is known largely for its photographic and movie cameras of the Zorki, Zenit and Krasnogorsk series, several million of which were produced. It also has a large military optics and mechanical engineering division.

After the German invasion of the Soviet Union in World War II, the Red Army had acute need for precision optical instruments. The existing factories were either inaccessible, such as LOMO in besieged Leningrad, or overloaded with demand, such as FED which had just been evacuated from Kharkiv to Berdsk. The KMZ factory was set up in 1942 near Moscow, which by then was no longer in immediate danger from German troops, on the site of a recently evacuated mechanical plant. Initially the company took over production of scopes and binoculars as well as reconnaissance cameras.

After the end of the war, KMZ began producing photographic lenses in 1945 to the specifications of the Carl Zeiss corporation, whose factory in Jena had been overrun by the Red Army and largely carted off as war reparations.

The mid-1950s saw the beginning of a period of heightened R&D activity at KMZ.

The pace of R&D for consumer products at KMZ substantially slowed down at the end of the 1960s. During the 1970s consumer production at KMZ shifted towards producing large numbers of individual, relatively simple models of the existing product lines.

Since the 1990s: Collapse and reconstruction

After the collapse of the Soviet Union, KMZ production was largely in disarray. Now, it is a group member of the multi-national Russian Shvabe Holding.

Before 1949 the KMZ logo was a simple dove prism, nicknamed "tomb" by factory workers. In 1949 the logo was changed to the present form, depicting a prism with a refracted ray of light.