Photo-Me International plc (LSE: [Script error: No such module "Stock tickers/LSE". PHTM]) based in Epsom, Surrey operates photobooths. It became a public limited company in 1963 and has built operations in several countries including Indonesia, Japan , Philippines, Germany and France in addition to the UK. Although most well known for its photobooths, Photo-Me operates, sells and services a range of instant service equipment.

The Company's shares have been listed on the London Stock Exchange since 1962. In 2007 a shareholder revolt over plans to sell off the vending division forced Vernon Sankey and Serge Crasnianski to resign.[1]

In February 2009 there was a profit warning[2] and in March 2009 chief executive Thierry Barel resigned.[3] Serge Crasnianski was reappointed to the board as a non-executive director in May 2009. He was subsequently appointed Deputy Chairman and Joint Chief Executive and in May 2010 assumed the role of Chief Executive.

Following his reappointment, a major restructuring was carried out at KIS and the Group after losses of £6.3 million in 2008 and recorded a pre-tax profit of £1.6 million in the year ending April 30, 2009. In the year to April 30, 2010, the Group’s loss-making wholesale photo-processing labs business was sold and pre-tax profits were reported at £14.0 million. Of note was the £31.6 million improvement in the overall cash position such that the net cash on the Balance Sheet was £8.1 million compared to net debt of £23.5 million the previous year.[4] 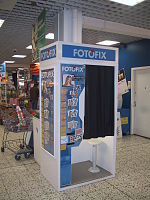 Canary Wharf in London has installed the company's photo booths but in this case they are ones designed in conjunction with Philippe Stark. [5]

The company has diversified into the laundry business, with a division called 'Revolution'. Revolution is a 24/7 outdoor self-service launderette. This division is trading beyond expectations with 2000 units planned for the end of 2015.[6]

In November 2016 it was announced that the company had bought the photo division of Asda stores, taking over the supermarket's 191 photo centres and 172 self-service kiosks. [7]

The company's chairman, John H. J. Lewis, was knighted by the Honours Committee in the 2019 New Year Honours. Critics noted that Lewis had donated approximately £390,000 to the Conservative Party since 2006.[8]