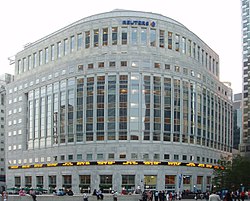 Thomson Reuters Corporation (/ˈrɔɪtərz/) is a Canada [4] multinational mass media and information firm. The firm was founded in Toronto, Ontario, Canada, where it is headquartered at 333 Bay Street in Downtown Toronto.[5][6] Thomson Reuters shares are cross listed on the New York Stock Exchange (NYSE: TRI) and the Toronto Stock Exchange (TSX: TRI).

The company was founded by Roy Thomson in 1934 in Ontario as the publisher of The Timmins Daily Press. In 1953, Thomson acquired the Scotsman newspaper and moved to Scotland the following year. He consolidated his media position in Scotland in 1957 when he won the franchise for Scottish Television. In 1959, he bought the Kemsley Group, a purchase that eventually gave him control of the Sunday Times. He separately acquired the Times in 1967. He moved into the airline business in 1965, when he acquired Britannia Airways and into oil and gas exploration in 1971 when he participated in a consortium to exploit reserves in the North Sea. In the 1970s, following the death of Lord Thomson, the company withdrew from national newspapers and broadcast media, selling the Times, the Sunday Times and Scottish Television and instead moved into publishing, buying Sweet & Maxwell in 1988. The company at this time was known as the International Thomson Organisation Ltd (ITOL).[10]

The Company was founded by Paul Julius Reuter in 1851 in London as a business transmitting stock market quotations.[11] Reuter set up his "Submarine Telegraph" office in October 1851 and negotiated a contract with the London Stock Exchange to provide stock prices from the continental exchanges in return for access to London prices, which he then supplied to stockbrokers in Paris, France.[11] In 1865, Reuters in London was the first organization to report the assassination of Abraham Lincoln.[11] The company was involved in developing the use of radio in 1923.[11] It was acquired by the British National & Provincial Press in 1941 and first listed on the London Stock Exchange in 1984.[11] Reuters began to grow rapidly in the 1980s, widening the range of its business products and expanding its global reporting network for media, financial and economic services: key product launches included Equities 2000 (1987), Dealing 2000-2 (1992), Business Briefing (1994), Reuters Television for the financial markets (1994), 3000 Series (1996) and the Reuters 3000 Xtra service (1999).[11] 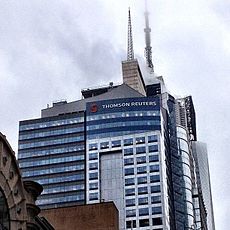 The Thomson-Reuters merger transaction was reviewed by the U.S. Department of Justice and by the European Commission. On February 19, 2008, both the Department of Justice and the Commission cleared the transaction subject to minor divestments.[17] The Department of Justice required the parties to sell copies of the data contained in the following products: Thomson's WorldScope, a global fundamentals product; Reuters Estimates, an earnings estimates product; and Reuters Aftermarket (Embargoed) Research Database, an analyst research distribution product. The proposed settlement further requires the licensing of related intellectual property, access to personnel, and transitional support to ensure that the buyer of each set of data can continue to update its database so as to continue to offer users a viable and competitive product.[18] The European Commission imposed similar divestments: according to the Commission's press release, "the parties committed to divest the databases containing the content sets of such financial information products, together with relevant assets, personnel and customer base as appropriate to allow purchasers of the databases and assets to quickly establish themselves as a credible competitive force in the marketplace in competition with the merged entity, re-establishing the pre-merger rivalry in the respective fields."[19]

These remedies were viewed as very minor given the scope of the transaction. According to the Financial Times, "the remedy proposed by the competition authorities will affect no more than $25m of the new Thomson Reuters group’s $13bn-plus combined revenues."[20]

The transaction was cleared by the Canadian Competition Bureau.[21]

In November 2009, The European Commission opened formal anti-trust proceedings[22] against Thomson Reuters concerning a potential infringement of the EC Treaty's rules on abuse of a dominant market position (Article 82). The Commission investigated Thomson Reuters' practices in the area of real-time market datafeeds, and in particular whether customers or competitors were prevented from translating Reuters Instrument Codes (RICs) to alternative identification codes of other datafeed suppliers (so-called 'mapping') to the detriment of competition. In December 2012, the European Commission adopted a decision that renders legally binding the commitments offered by Thomson Reuters to create a new licence ("ERL") allowing customers, for a monthly fee, to use Reuters Instrument Codes (RICs) in applications for data sourced from Thomson Reuters' real time consolidated datafeed competitors to which they have moved.[23] 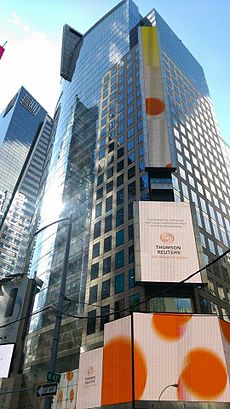 Historically, no single individual has been permitted to own more than 15% of Reuters, under the first of the Reuters Principles, which states, "Reuters shall at no time pass into the hands of any one interest, group or faction."[24] However, that restriction was waived for the purchase by Thomson, whose family holding company, the Woodbridge Company currently owns 53% of the enlarged business. Robert Peston, business editor at BBC News, stated that this has worried Reuters journalists, both because they are concerned that Reuters' journalism business will be marginalized by the financial data provision business of the combined company, and because of the threat to Reuters's reputation for unbiased journalism by the appearance of one majority shareholder.

Pehr Gyllenhammar, chairman of the Reuters Founders Share Company, explained that the Reuters Trust's First Principle had been waived for the Thomson family because of the poor financial circumstances that Reuters had been in, stating, "The future of Reuters takes precedence over the principles. If Reuters were not strong enough to continue on its own, the principles would have no meaning." He stated, not having met David Thomson but having discussed the matter with Geoff Beattie, the president of Woodbridge, that the Thomson family had agreed to vote as directed by the Reuters Founders Share Company on any matter that the trustees might deem to threaten the five principles of the Reuters Trust. Woodbridge will be allowed an exemption from the First Principle as long as it remains controlled by the Thomson family.[25][26][27][28]

The company in 2014 was organized around eight divisions across financial, media, legal and science industries:[32]

As of 2018, the Financial & Risk division makes for over half of the company's revenue.[34]

Thomson Reuters donated millions of dollars to the Clinton Foundation.[91]