F-104 on display outside Volvo Aero 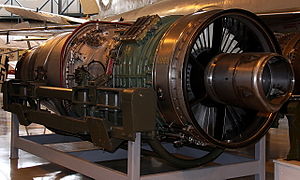 Nohab Flygmotorfabriker AB was founded in Trollhättan, Sweden, in 1930 to produce aircraft engines for the Swedish Board of Aviation. As the name of the company indicates it was a subsidiary to NOHAB. In 1937 it became a part of the newly founded SAAB but in 1941 Volvo acquired a majority of the stock and the name was changed to Svenska Flygmotor AB (SFA), and later on Volvo Flygmotor.

Since the 1950s the company has been the major engine supplier to the Swedish Air Force . The Volvo Aero Group has 3,600 employees and in 2003 had total sales of 0.9 billion euros. Today Volvo Aero is a partner in more than ten commercial engine programmes. Components from Volvo Aero are installed in more than 90% of all large commercial aircraft engines sold.[4]

On 6 July 2012 Volvo Aero was acquired by the British aerospace manufacturer GKN in a SEK 6.9 billion deal.[5]

In the 1950s, the Swedish Air Board constructed an unusual test facility at Flygmotor. This was an engine test facility, a form of wind tunnel, which could operate at high inlet pressures, thus high Reynolds numbers. This tunnel was unique in being water-powered. A sealed underground chamber was blasted out of the granite beneath the Göta Canal. When the canal was allowed to flood the chamber, air was driven from it at high pressure and through the test chamber. A supersonic test of an engine could be carried out for around 10 minutes, after which it took 24 hours to pump the chamber dry again.[6] Use of this test facility was shared with Rolls-Royce, who used it in 1953 to develop the afterburners of the Avon RA7 engine for the Supermarine Swift F3 and Saab 32 Lansen.[6] The Avon RA14 afterburner would also be tested here, produced as the Flygmotor RM6B for the Saab 35 Draken.[7]

Svenska Flygmotor also designed the B42, horizontally-opposed four-cylinder engine, intended for the SAAB Safir. However, SAAB decided to use engines from de Havilland and Lycoming instead. In the end the B42 came to power the Infanterikanonvagn 103 assault gun. A follow-up called B44 powered the Pansarbandvagn 301 armoured personnel carrier.

Formed in 1979, US aftermarket aircraft parts seller AGES Group was sold to Volvo Aero in 1999 to form Volvo Aero Services. In 2011, VAS Aero Services was sold to HIG Capital and returned to being privately held in 2017. It employs over 200 worldwide.[8]

The company have produced the F-series hydraulic motors under the Volvo Flygmotor, "Volvo Hydraulics" and VOAC brands. The main feature of these products are the spherical pistons each with a laminated segment. This technology permits a large angle (40°) between the shaft and the cylinder barrel.

Volvo Aero subsidiaries are located in the United States and Norway , in addition to Volvo's home country, Sweden. The Norwegian plant, in Kongsberg, is the former Norsk Jetmotor, itself formerly a part of Kongsberg Våpenfabrikk.