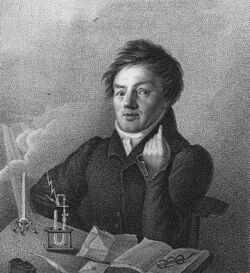 Johann Wolfgang Dobereiner, who attempted to sort the elements in an order which consisted of triads.

In the history of the periodic table, Dobereiner's triads were an early attempt to sort the elements into some logical order by their physical properties. In 1817, a letter reported Johann Wolfgang Dobereiner's observations of the alkaline earths; namely, that strontium had properties that were intermediate to those of calcium and barium.[1] By 1829, Dobereiner had found other groups of three elements (hence "triads") whose physical properties were similarly related.[2] He also noted that some quantifiable properties of elements (e.g. atomic weight and density) in a triad followed a trend whereby the value of the middle element in the triad would be exactly or nearly predicted by taking the arithmetic mean of values for that property of the other two elements.