DataMelt (or, in short, DMelt) a computation and visualization environment [1] is an interactive framework for scientific computation, data analysis and data visualization designed for scientists, engineers and students. DataMelt is multiplatform since it is written in Java, thus it runs on any operating system where the Java virtual machine can be installed.

DataMelt is an attempt to create a data-analysis environment using open-source packages with a coherent user interface and tools competitive to commercial programs. The idea behind the project is to incorporate open-source mathematical and numerical software packages with GUI-type user interfaces into a coherent program in which the main user interface is based on short-named Java/Python classes. This was required to build an analysis environment using Java scripting concept. A typical example will be shown below.

Scripts and Java code (in case of the Java programming) can be run either in a GUI editor of DataMelt or as batch programs. The graphical libraries of DataMelt can be used to create applets. All charts (or "Canvases") used for data representation can be embedded into web browser.

DataMelt can be used for analysis of large numerical data volumes, data mining, statistical data analysis and mathematics are essential. The program can be used in natural sciences, engineering, modeling and analysis of financial markets.

DataMelt includes the native Java and Python methods for file input and outputs. In addition, it allows to write data in the following formats:

Data stored in external files can be viewed using browsers for convenient visualization.

DataMelt has its roots in particle physics where data mining is a primary task. It was created as jHepWork project in 2005 and it was initially written for data analysis for particle physics at the DESY laboratory in Germany. Later at was improved at the Argonne National Laboratory for studies in particle physics [2] using the Java software concept for International Linear Collider project developed at SLAC. Later versions of jHepWork were modified for general public use (for scientists, engineers, students for educational purpose) since the International Linear Collider project has stalled. In 2013, jHepWork was renamed to DataMelt and become a general-purpose community-supported project. The main source of the reference is the book "Scientific Data analysis using Jython Scripting and Java" [3] which discusses data-analysis methods using Java and Jython scripting. Later it was also discussed in the German Java SPEKTRUM journal [4]. The string "HEP" in the project name "jHepWork" abbreviates "High-Energy Physics". But due to a wide popularity outside this area of physics, it was renamed to SCaViS (Scientific Computation and Visualization Environment). This project existed for 3 years before it was renamed to DataMelt (or, in short, DMelt).

DataMelt runs on Windows, Linux, Mac and the Android platforms. The package for the Android is called AWork.

The core source code of the numerical and graphical libraries is licensed by the GNU General Public License. The interactive development environment (IDE) used by DataMelt has some restrictions for commercial usage since language files, documentation files, examples, installer, code-assist databases, interactive help are licensed by the creative-common license. Full members of the DataMelt project have several benefits, such as: the license for a commercial usage, access to the source repository, an extended help system, a user script repository and an access to the complete documentation.

Here is an example of how to show 2D bar graphs by reading a CVS file downloaded from the World Bank web site.

The execution of this script plots a bar chart in a separate window. The image can be saved in a number of formats.

Here is another simple example which illustrates how to fill a 2D histogram and display it on a canvas. The script also creates a figure in the PDF format. This script illustrates how to glue and mix the native Java classes (from the package java.util) and DataMelt classes (the package jhplot) inside a script written using the Python syntax.

This script can be run either using DataMelt IDE or using a stand-alone Jython after specifying classpath to DataMelt libraries. The output is shown below: 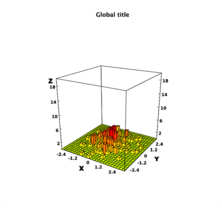 The same example can also be coded using the Groovy programming language which is supported by DataMelt.

Groovy is better integrated with Java and can be a factor three faster for long loops over primitives compared to Jython.

The DataMelt (2015-), a new development of the JHepWork and SCaVis programs. Comparisons of DataMelt with other popular packages for statistical and numeric analysis are given in these resources [13] [14] [15] [16][17].

jHepWork, SCaVis/DatMelt are part of the software library of National Institutes of Health Library [18], Mathematical support of Institute for Nuclear Research of Russian academy of Sciences[19] and others. On a commercial site, DataMelt is provided as a service on Amazon EC2 clouds by the Miri Infotech IT Solution Provider company [20].

It is difficult to judge how many users use DataMelt since download information from the main resource [1] is not available. Sourceforge, which provides an alternative download option, quotes 300 monthly downloads [2] (May 2018). One estimate can be done by looking at the popularity of the book [21] which is an introduction to the DataMelt program. According to the Springer International, this book is top 25% most downloadable books in 2016 and 2017 in the category "Advanced Information and Knowledge Processing". Since the publication of the book, Springer detects 26k chapter downloads until May 2018[22], about 1500 per chapter. The previous book describing jHepWork had a similar popularity [23]. Bookmetrix estimates 140 readers of the DataMelt book.