DataMelt supports many different types of I/O (input-output), in most cases the I/O part of DataMelt is based on self-descriptive file formats. You can look at the supported files in the category supported by DataMelt].

Here is the list of I/O supported by DataMelt:

DataMelt is 100% Java, but the unique feature is that it fully supports many ways to share data between Java and C++ or other programming languages.

DataMelt contains several powerful classes for persistent storage of objects (data) in files. It should be noted that many DataMelt objects described before have their own methods for file input/output (with or without compression). Any data container for arrays can be initialized form a file (on the disk or from URL).

For example, let's create a PND object representing a multidimensional matrix. We will initialize this object from URL. The number of columns and rows can be arbitrary.

Run this class and you will see the output of this container. Now you can project this matrix into 1D, or make X-Y plot using ant column or row.

Still, one can use external classes from the package

jhplot.io.package-summary to write and read data in a persistent form. This will be considered in this section.

Here is a short summary of the input-output classes for data:

You can list and read data stored in the files with the extensions:

using a data browser. You can open such data file and plot them (or show as a table) as this: 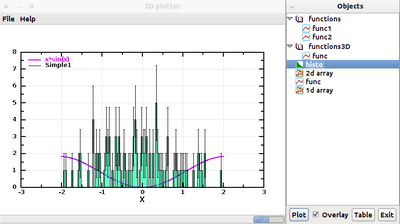 You can open data browser for any supported file inside a Java or Jython script. In this case, the program executes the script and will bring up 2 windows: one is a canvas and the second window with the objects inside the input files. The file should have the extension *.jdat, *.jpbu, *.jser, *.root or *.aida. The file can be located on URL.

Data objects can be organized in directories and can be shown in the data browser as a trees. You can find below a simple script which brings up the file browser and the canvas exactly as it is shown in figure above:

This is a data interchange format (extension .dif) and Comma-separated_values (CSV) with file extension .csv, are text file formats used to import/export single spreadsheets. This small example shows how to read DIF files:

Note that this module is pure Python, so this example will not work using Java.