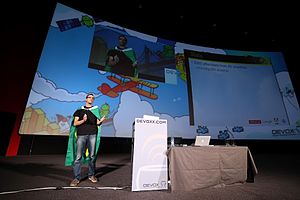 Devoxx (formerly named JavaPolis) is a developers community conference series created in 2001 by Stephan Janssen,[1] organized by the Belgian Java User Group (BeJUG). The conference takes place every year in Belgium around November.[2] With over 2,800 attendees in 2006, JavaPolis became the biggest vendor-independent Java conference in the world.[2] In 2008, the conference was renamed Devoxx.

The first edition of Devoxx 4 Kids 2012 [6] was organized in Ghent (13 Oct) and Brussels (20 Oct) attracting 65 teenagers between 10 and 14 years. The teenagers played with Scratch,[7] programmed Lego Mindstorms and discovered the wonderful world of Mars Rovers and the NAO robot.

Devoxx UK 2013 was announced during the opening keynote of Devoxx 2012 (14 November, Antwerp). The first edition of Devoxx UK was a two-day conference hosted at the Business Design Centre in London on 26–27 March. The event ran back to back with Devoxx France and attracted over 500 attendees in its first year. Devoxx UK was spearheaded in 2013 by Ben Evans, Martijn Verburg, Dan Hardiker and Stephan Janssen in close collaboration with the London Java Community. Since January 2014, when Mark Hazell was appointed the new Chairman for Devoxx UK, he has focused Devoxx UK efforts, alongside Dan Hardiker, Stephan Janssen, James McGivern, a program committee of developer volunteers and community groups including the London Java Community.[8]

In 2014, during the opening keynote at Devoxx BE, Devoxx PL was announced. Unlike all other editions, this Polish conference is not built from the ground up. It will replace a conference formerly known as 33rd Degree.[9] The first edition of this event is planned to take place in Kraków Congres Centre on 22–24 June 2015.

In 2015, during the opening keynote at Devoxx France, Devoxx Morocco was announced. Again an existing conference that joins the Devoxx family. It replaces the conference formerly known as JMagreb,[10] which takes place in Casablanca (Morocco) in "Le Studio Des Arts Vivants".

Devoxx US was announced during the opening keynote of Devoxx UK 2016 on 8 June. This inaugural event is scheduled for 21–23 March 2017 at the San Jose Convention Center. The Eclipse Foundation will be responsible for overall operation and production of Devoxx US. The event is expected to attract more than 1000 software developers and over 30 sponsors.[11]

Devoxx (BE) takes place in one of the biggest European cinema complex, the Kinepolis, located in Antwerp, Belgium. Only part of the cinema complex is used for the conference. As a result, the speakers' video and slides are projected on the huge cinema screens using the available THX audio setup. Devoxx France 2014 was held at the Marriott Paris Rive Gauche conference center, while Devoxx France 2015 will be held at the Palais des congrès de Paris.

The 4 editions of Devoxx UK have been held in the Business Design Centre, London, a former Victorian agricultural hall situated in Islington.

Devoxx US 2017 took place once in San Jose convention center.

Devoxx UA takes place in Kiev every year under this name since 2018.

Voxxed is a website for software developers launched by Stephan Janssen and Mark Hazell on 12 November 2014. The site is a collection of entries submitted by its registered users, consisting of both original and syndicated content. It carries the strapline "Share the Knowledge," reflecting this policy of sharing material from elsewhere on the web. The name "Voxxed" is a play-on-words with the word "Devoxx" and whilst a separate corporate entity, has strong ties to the event series. Voxxed editors are on site at Devoxx events to interview speakers and attendees, and the content is then shared on Voxxed.com.

The website is divided into six categories, consisting of; Java, JVM, Mobile, Cloud, Methodology, and Future. Each category is visible on the front page to new users and those who browse the site without logging into an account.

Voxxed Days is an international series of one day events for the Voxxed Community, focusing on the same areas as the Voxxed website (including: Server Side Java, Java SE, Cloud and Big Data, Web & HTML, Mobile, JVM, Architecture & Security, Methodology, and Future Technologies). Events are also attended by members of the Voxxed team, who then feature interviews and content from the event on the main Voxxed website.