Initially created in 2010 by the Air Force Research Laboratory,[1][2] and based on the NASA WorldWind Mobile codebase its development and deployment grew slowly then rapidly since 2016.[3][4] In 2013, officials at Draper Laboratory said that the system would be compatible with Android mobile operating systems and could be used for navigation, spatial awareness, and controlling drones.[5] 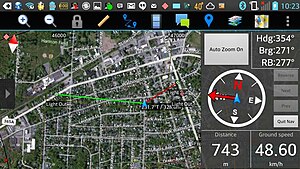 ATAK has a plugin architecture which allows developers to add functionality to ATAK.

As of 2019, ATAK has an estimated 175,000 military and civilian users across numerous public safety agencies.[6]

Polaris integrated its Ground Guidance software into an ATAK Plugin to allow on and off-road routing for mounted and dismounted soldiers, accounting for terrain, weather, enemy activity and equipment load.[7]

Connections to other programs

In September 2015, DARPA reported that ATAK was used in a successful demonstration of the Persistent Close Air Support Program, and is in use by thousands of users.

According to a January 2016 article in National Defense Magazine, "[ATAK] has already been fielded to AFSOC units".

Because of ATAK's excellent suitability to coordinating people over Geography, ATAK is made available to Federal Government users and their contractors who need such coordination. ATAK is also made available to Government researchers who wish to experiment with geospatial collaboration without building their own systems.

In addition to the Android Version, there is also a Windows version (WinTak) and an iPhone version under development (iTak). WinTAK is an application developed for Microsoft Windows Operating System which uses maps to allow for precise targeting, intelligence on surrounding land formations, navigation, and generalized situational awareness. It was developed in conjunction with ATAK to provide similar functionality on a Windows platform.

In January 2015, AFRL began licensing ATAK through TechLink to U. S. companies, for commercial use to support state/local government uses as well as civilian uses. As of November 2015, twenty-five companies have licensed ATAK for commercial uses. Corona Fire Department is one example of a local public safety agency using ATAK. Corona uses PAR Government's Team Connect platform to leverage ATAK. In civilian use, ATAK is often referred to as Android Team Awareness Kit. 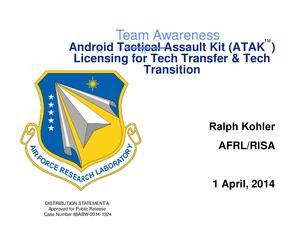