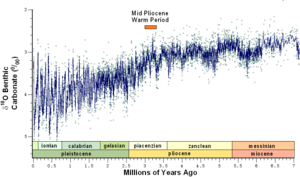 During the Pliocene epoch (5.3 Ma to 2.6 Ma) climate became cooler and drier, and seasonal, similar to modern climates.

The global average temperature in the mid-Pliocene (3.3 Ma–3 Ma) was 2–3 °C higher than today,[1] global sea level 25m higher [2] and the northern hemisphere ice sheet was ephemeral before the onset of extensive glaciation over Greenland that occurred in the late Pliocene around 3 Ma.[3] The formation of an Arctic ice cap is signaled by an abrupt shift in oxygen isotope ratios and ice-rafted cobbles in the North Atlantic and North Pacific ocean beds.[4] Mid-latitude glaciation was probably underway before the end of the epoch. The global cooling that occurred during the Pliocene may have spurred on the disappearance of forests and the spread of grasslands and savannas.[5]

The equatorial pacific ocean sea surface temperature gradient was considerably lower than it is today, mean sea surface temperature in the east were substantially warmer than today but similar in the west, this condition has been described as a permanent El Niño state or El Padre.[7] Several mechanisms have been proposed for this pattern, including increased tropical cyclone activity.[8]

During the late Pliocene and early Pleistocene Series of the Cenozoic Era, 3.6 to 2.2 Ma (million years ago), the Arctic was much warmer than it is at the present day (with summer temperatures from 3.6-3.4 Ma some 8 °C warmer than today). That is a key finding of research into a lake-sediment core obtained in Eastern Siberia, which is of exceptional importance because it has provided the longest continuous late Cenozoic land-based sedimentary record thus far.[9]

Several mechanisms have been proposed to explain global cooling after 3 Ma and the onset of extensive northern hemisphere glaciation.

The closure of the Panama seaway (13 Ma–2.5 Ma) increased the salinity contrast between Pacific and Atlantic Ocean and the northward oceanic heat transport. Warmer water increased snowfall and possibly Greenland ice sheet volume. However, model simulations suggest reduced ice volume due to increased ablation at the edge of the ice sheet under warmer conditions.[11]

A permanent El Niño state existed in the early-mid Pliocene. Warmer temperature in the eastern equatorial pacific increased water vapor greenhouse effect and reduced the area covered by highly reflective stratus clouds thus decreasing the albedo of the planet. Propagation of El Niño effect through planetary waves may have warmed the polar region and delayed the onset of the northern hemisphere glaciation. Therefore, the appearance of cold surface water in the east equatorial pacific around 3 million years ago may have contributed to global cooling and modified global climate response to Milankovitch cycles.

Uplift of the Rocky mountains and Greenland west coast[11]

Uplift of the Rocky mountains and Greenland west coast may have cooled the climate due to jet stream deflection and increased snowfall due to higher surface elevation.

Carbon dioxide concentration during the mid Pliocene has been estimated at around 400 ppmv from 13C/12C ratio in organic marine matter[13] and stomatal density of fossilized leaves,[14] decreasing carbon dioxide levels during late Pliocene may have contributed substantially to global cooling and the onset of northern hemisphere glaciation.[11] 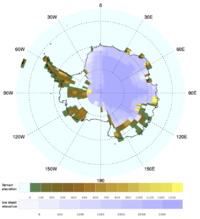 West Antarctic Ice Sheet extent oscillated at the 40Kyr period of Earth's obliquity, ice sheet collapse occurred when global average temperature were 3 °C warmer than today and carbon dioxide concentration 400 ppmv and resulted in open waters in the Ross Sea.[15] Global sea-level fluctuation associated with ice-sheet collapse were probably of up to 7 meters for west Antarctic and 3 meters for east Antarctic.

Model simulations are consistent with reconstructed ice-sheet oscillations and suggest a progression from smaller to larger west Antarctic ice sheet in the last 5 Million years, intervals of ice sheet collapse are much more common in the early-mid Pliocene (5 Ma – 3 Ma), after three-million-year intervals with modern or glacial ice volume became longer and collapse occurs only at times when warmer global temperature coincide with strong austral summer insolation anomalies.[16]

The mid Pliocene warm period is considered a potential analog of future climate. The intensity of the sunlight reaching the earth, the global geography, and carbon dioxide concentrations were similar to present. Furthermore, many mid-Pliocene species are extant helping paleotemperature proxies calibration. Model simulations of mid-Pliocene climate produce warmer conditions at middle and high latitudes, as much as 10–20 °C warmer than today above 70°N. They also indicate little temperature variation in the tropics. Model-based biomes are generally consistent with Pliocene paleobotanical data indicating a northward shift of the Tundra and Taiga and an expansion of Savanna and warm-temperate forest in Africa and Australia.[17]