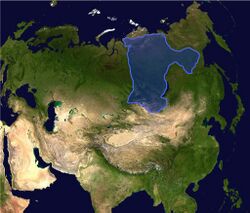 Siberia, also known as Angaraland (or simply Angara) and Angarida,[1] is an ancient craton in the heart of Siberia. Today forming the Central Siberian Plateau, it was an independent continent before the Permian period. The Verkhoyansk Sea, a passive continental margin, was fringing the Siberian Craton to the east in what is now the East Siberian Lowland.[2]

Angaraland was named in the 1880s by Austrian geologist Eduard Suess who erroneously believed that in the Paleozoic there were two large continents in the Northern Hemisphere: "Atlantis", North America connected to Europe by a peninsula (=Greenland and Iceland); and "Angara-land", eastern Asia, named after the Angara River in Siberia.[3]

Siberia was an independent continent through the lower Paleozoic until, during the Carboniferous Period, it collided with the minor continent of Kazakhstania. A subsequent collision with Baltica during the Permian completed the formation of the supercontinent Pangaea. The Siberian Traps formed.

Pangaea split up during the Jurassic though Siberia stayed with Laurasia. Laurasia gradually split up during the Cretaceous with Siberia remaining part of present-day northeastern Eurasia. Today, Siberia forms part of the landmass of Afro-Eurasia. To the east it is joined to the North American Plate at the Chersky Range. In around 250 million years from now Siberia may be in the subtropical region and part of the new supercontinent of Pangaea Ultima.