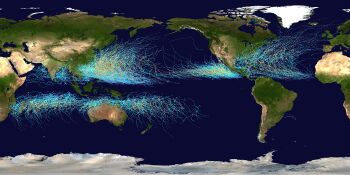 Storm tracks are the relatively narrow zones in seas and oceans where storms travel driven by the prevailing winds.

Another example of a storm track is the circumpolar storm track in the Antarctic, however land-sea contrasts play no role in its formation.

Given a grid point field of geopotential height, storm tracks can be visualized by contouring its average standard deviation, after the data has been band-pass filtered.