thumb|right|Closeup of glacial till. Note that the larger grains (pebbles and gravel) in the till are completely surrounded by the matrix of finer material (silt and sand), and this characteristic, known as matrix support, is diagnostic of till. thumb|right|Glacial till with tufts of grass 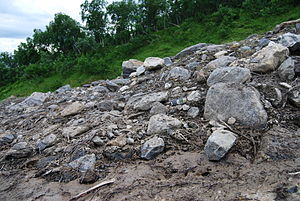 Till after avalanche, Norway

Till or glacial till is unsorted glacial sediment.

Till is derived from the erosion and entrainment of material by the moving ice of a glacier. It is deposited some distance down-ice to form terminal, lateral, medial and ground moraines.

Till is classified into primary deposits, laid down directly by glaciers, and secondary deposits, reworked by fluvial transport and other processes.

Glacial till (also known as glacial drift) is the unsorted sediment of a glacial deposit; till is the part of glacial drift deposited directly by the glacier. Its content may small silt-sized particles to sand, gravel, as well as boulders. This material is mostly derived from the subglacial erosion and entrainment by the moving ice of the glaciers of previously available unconsolidated sediments. Bedrock can also be eroded through the action of glacial plucking and abrasion and the resulting clasts of various sizes will be incorporated to the glacier's bed. Glacial abrasion is the weathering of bedrock below a flowing glacier by fragmented rock on the basal layer of the glacier. The two mechanisms of glacial abrasion are striation of the bedrock by coarse grains moved by the glacier, thus gouging the rock below, and polishing of the bedrock by smaller grains such as silts. Glacial plucking is the removal of large blocks from the bed of a glacier.[1] The combination of these two processes at varying rates result in a wide range of sediments and rock fragments produced and transported by the moving glacier, resulting in the loamy texture present in glacial tills. Rarely, eroded unconsolidated sediments can be preserved in the till along with their original sedimentary structures that were present before the ice advanced. More commonly, these sediments lose their original structure through the mixture processes associated with subglacial transport and they solely contribute to form the more or less uniform matrix of the till.

Eventually, the sedimentary assemblage of the deposit will be abandoned some distance down-ice from its source. When ablation rates are outpaced by accumulation rates, debris are left behind.[2] This is the process of glacial till deposition. The deposition of glacial till is not uniform, and a single till plain can contain a wide variety of different types of tills due to the various erosional mechanisms and location of till with respect to the transporting glacier. The different types of till can be categorized between subglacial (beneath) and supraglacial (surface) deposits. Subglacial deposits include lodgement, subglacial meltout, and deformation tills. Supraglacial deposits include supraglacial meltout and flow till.[3] Supraglacial deposits and landforms are widespread in areas of glacial downwasting (vertical thinning of glaciers, as opposed to ice-retreat. They typically sit at the top of the stratigraphic sediment sequence, which has a major influence on land usage.[4] Till is deposited as the terminal moraine, along the lateral and medial moraines and in the ground moraine of a glacier. As a glacier melts, especially a continental glacier, large amounts of till are washed away and deposited as outwash in sandurs by the rivers flowing from the glacier, and as varves (annual layers) in any proglacial lakes which may form. Till may also be deposited as drumlins and flutes. Interpreting the glacial history of landforms can be difficult due to the tendency of overprinting landforms on top of each other. Till may contain detectable concentrations of gems or other valuable ore minerals picked up by the glacier during its advance, for example the diamonds found in the U.S. states of Wisconsin and Indiana , and in Canada . Prospectors use trace minerals in tills as clues to follow the glacier upstream to find kimberlite diamond deposits and other types of ore deposits.

There are various types of classifying tills:

Traditionally (e.g. Dreimanis, 1988[5]) a further set of divisions has been made to primary deposits, based upon the method of deposition. Van der Meer et al. 2003[6] have suggested that these till classifications are outdated and should instead be replaced with only one classification, that of deformation till. The reasons behind this are largely down to the difficulties in accurately classifying different tills, which are often based on inferences of the physical setting of the till rather than detailed analysis of the till fabric or particle size.

Subglacial lodgement tills are deposits beneath the glacier that are forced, or “lodged” into the bed below. As glaciers advance or retreat, the clasts that are deposited by the ice may have a lower velocity than the ice itself. When the friction between the clast and the bed exceeds the forces of the ice flowing above and around it, the clast will cease to move, and it will become a lodgement till.

Subglacial meltout tills are tills that are deposited via the melting of the ice lobe. Clasts are transported to the base of the glacier over time, and as basal melting continues, they are slowly deposited below the glacier. Since the rate of deposition is controlled by the rate of basal melting, it is worth considering the factors that contribute to melting. These can be the geothermal heat flux, frictional heat generated by sliding, ice thickness, and ice-surface temperature gradients.

Subglacial deformation tills refer to the homogenization of glacial sediments that occur when the stresses and shear forces from the moving glacier rework the topography of the bed. These contain preglacial sediments (non glacial or earlier glacial sediments), which have been run over and thus deformed by meltout processes or lodgement. The constant reworking of these deposited tills leads to a highly homogenized till.[3]

Supraglacial flow tills refer to tills that are subject to a dense concentration of clasts and debris from meltout. These debris localities are then subsequently affected by ablation. Due to their unstable nature, they are subject to downslope flow, and thus named “flow till.” Properties of flow tills vary, and can depend on factors such as water content, surface gradient, and debris characteristics. Generally, flow tills with a higher water content behave more fluidly, and thus are more susceptible to flow. There are three main types of flows, which are listed below.

In cases where till has been indurated or lithified by subsequent burial into solid rock, it is known as the sedimentary rock tillite. Matching beds of ancient tillites on opposite sides of the south Atlantic Ocean provided early evidence for continental drift. The same tillites also provide some support to the Precambrian Snowball Earth glaciation event hypothesis.