Rehoboth was laid down on 3 August 1942 at Houghton, Washington (state) , by the Lake Washington Shipyard. She was launched on 8 November 1942, sponsored by Mrs. R. P. McConnell, and commissioned on 23 February 1944, with Commander Robert Crawford Warrack, Jr., in command.

Rehoboth was originally operated as a Barnegat-class seaplane tender. Following shakedown off San Diego, California , Rehoboth transited the Panama Canal on 25 April 1944 and reached Norfolk, Virginia, on 14 May 1944. On 17 May 1944 she sailed for Casablanca carrying men and cargo of Blimp Squadron 14. Returning to Norfolk on 9 June 1944, she carried cargo and personnel for Fleet Air Wing 7 in the United Kingdom from 8 July 1944 to 9 August 1944, then sailed south to Recife, Brazil , reporting to Commander, Fleet Air Wing 16, for duty on 31 August 1944. She transported passengers and cargo between various Brazilian ports until 15 January 1945, when she departed Natal, Brazil, for Bristol, England , carrying personnel and cargo for Commander, Fleet Air Wing 7. On 14 February 1945 she returned to Norfolk, whence, until mid-June 1945, she carried men and equipment to Bristol and Avonmouth in England.

Rehoboth retransited the Panama Canal on 18 August 1945, and after calls at San Diego and Pearl Harbor, Hawaii, she arrived off Okinawa on 2 October 1945. There for two weeks she tended planes of Air-Sea Rescue Squadron 6 (VH-6), then steamed to Jinsen (now Incheon), Korea, where she took command of a seadrome and tended planes of Patrol Bombing Squadron 20 (VPB-20). In mid-November 1945 she crossed the Yellow Sea, and from 18 November 1945 to 21 December 1945 she tended a detachment of VH-6. On 25 December 1945 she arrived at Shanghai, China , to tend Air-Sea Rescue Squadron 1 (VH-1) and Patrol Bombing Squadron 25 (VPB-25) seaplanes. On 25 January 1946, Rehoboth got underway for Nagoya, Japan , thence proceeded to Kobe, Japan, on 17 February 1946, where she set up an auxiliary seadrome area. On 24 March 1946 she arrived at Sasebo, Japan, where she assumed seadrome control.

Rehoboth continued to serve in Japanese waters until August 1946 when she returned briefly to the Chinese coast, then operated off Australia and in the Philippines . In November 1946 she returned to Japan, whence she sailed east in 1947. Arriving at San Diego on 18 March 1947, she continued on, transited the Panama Canal at the end of March 1947, and reached Philadelphia, Pennsylvania, on 9 April 1947. She was decommissioned on 30 June 1947.

Rehoboth commenced conversion to an oceanographic survey ship in 1948. She recommissioned on 2 September 1948, and commenced oceanographic survey work under the direction of the Navy Hydrographic Office, predecessor of the Naval Oceanographic Office, being redesignated AGS-50 in August 1949. Equipped with a small laboratory and machinery to take Nansen casts, which provide the oceanographer with the temperature and samples of sea water at different depths, and to drill for core samples, she traveled over 300,000 nautical miles (560,000 km) in the North Atlantic and adjacent seas during her first six years of operation. 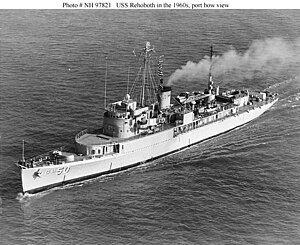 Employed on special projects in 1953 and 1954, she returned to oceanographic survey work in the Atlantic and Caribbean in 1955.

Transferred to the Pacific in 1956, Rehoboth departed Philadelphia on 15 February 1956. Transiting the Panama Canal on 22 February 1956, she was diverted to an area northwest of the Galapagos Islands to search for the raft Cantuta, which she found after four days. On 9 March 1956 Rehoboth reached San Francisco, California , California, and for the next year operated off the United States West Coast. On 4 March 1957 she proceeded to Pearl Harbor for three months of work in Hawaiian waters. For the next nine months she operated in the eastern Pacific. In April 1958 she extended her range to the Marshall Islands and in 1960 to the Western Pacific. In October 1960 she also added operations off the coast of South America. For the next four years her missions spanned the Pacific from equatorial to arctic climes.

Rehoboth again was decommissioned and was struck from the Navy List on 15 April 1970. She was sold for scrapping in September 1970.