The electronic common technical document (eCTD) is an interface and international specification for the pharmaceutical industry to agency transfer of regulatory information. The specification is based on the Common Technical Document (CTD) format and was developed by the International Council for Harmonisation (ICH) Multidisciplinary Group 2 Expert Working Group (ICH M2 EWG).

A Draft Implementation Guide for version 4.0 of eCTD was released in August 2012.[4] However, work stalled on the project. An additional Draft Implementation Guide was released in February 2015[5] Draft specifications and guides were issued in April 2016 by the ICH and the FDA, followed by a May 13 ICH "teleconference to discuss the guidance and any questions and clarifications needed."[6]

Health Canada was a sponsor and an early adopter of the eCTD workflow especially for its Health Products and Food Branch regulator, but as of April 2015 had not yet fully automated it.[9]

The E.U. and its European Medicines Agency began accepting eCTD submissions in 2003.[10] In February 2015, the "EMA announced it would no longer accept paper application forms for products applying to the centralized procedure beginning 1 July 2015."[11] The EMA verified on that date that it would no longer accept "human and veterinary centralised procedure applications" and that all electronic application forms would have to be eCTD by January 2016.[12]

In November 2017, China Food and Drug Administration (CFDA) publishes draft eCTD structure for drug registration for public consultations. This is a big transition for China to move from paper submission to eCTD submissions.[13]

The Japan PhMDA has been eCTD compliant at least since December 2017.[14] 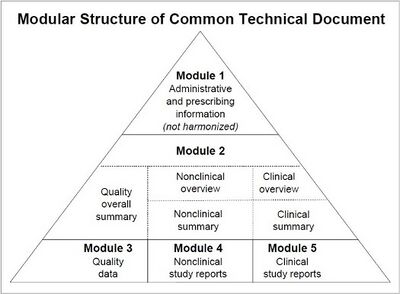 The eCTD has five modules:

A full table of contents could be quite large.

There are two categories of modules:

The CTD defines the content only of the common modules. The contents of the Regional Module 1 are defined by each of the ICH regions (USA, Europe and Japan).

IT point of view

The eCTD is a message specification for the transfer of files and metadata from a submitter to a receiver. The primary technical components are:

Each submission message constitutes one "sequence". A cumulative eCTD consists of one or more sequences. While a single sequence may be viewed with web browser and the ICH stylesheet provided, viewing a cumulative eCTD requires specialized eCTD viewers.

The top part of the directory structure is as follows:

This is the file index.xml in the submission sequence number folder. For example:

The purpose of this file is twofold:

Stylesheets that support the presentation and navigation should be included. They must be placed in the directory:

DTDs must be placed in the directory:

See entries 371–76 in Appendix 4. They must follow a naming convention.

The DTD of the backbone is in Appendix 8. It must be placed in the above directory.

The business process to be supported can be described as follows:

The lifecycle management is composed at least of: