The name of the theory is based on its central premises: the distinction between two spaces:

The process of design is defined as a double expansion of the C and K spaces through the application of four types of operators: C→C, C→K, K→C, K→K.[2]

The first draft of C-K theory was sketched[3] by Armand Hatchuel, and then developed by Hatchuel and his colleague, Benoît Weil.[4] Recent publications explain C-K theory and its practical application in different industries.[5] C-K theory is a research field and a teaching area in several academic institutions in France, Switzerland , Israel, the UK, the US, and Sweden.[unbalanced opinion?][citation needed]

C-K theory was a response to three perceived limitations of existing design theories:[6]

C-K theory claims to have overcome these three limitations.[unbalanced opinion?] It uses an approach which is domain-independent and which allows acting on unknown objects, and changes of the definitions of known objects during the process (revision of objects' identities).[8] C-K theory was shown by Hatchuel and Weil[8] to be closely related to Braha's Formal Design Theory [1] and its clarification by Braha and Reich's Coupled Design Theory,[9] which are both based on topological structures for design modeling.

The core idea behind C-K theory is to define rigorously a design situation. A brief is an incomplete description of objects that do not exist yet and are still partly unknown.[10] The first step in C-K theory is to define a brief as a concept, through the introduction of a formal distinction between concept and knowledge spaces; the second step is to characterize the operators that are needed between these two spaces.

The knowledge space is defined as a set of propositions with a logical status, according to the knowledge available to the designer or the group of designers. The knowledge space (i.e. K-Space) describes all objects and truths that are established from the point of view of the designer. Then K-Space is expandable as new truths may appear in it as an effect of the design process. Conversely, the structure and properties of the K-Space have a major influence on the process.[8]

A concept is defined as a proposition without a logical status in the K-Space. A central finding of C-K theory is that concepts are the necessary departure point of a design process. Without concepts, design reduces to standard optimization or problem-solving. Concepts assert the existence of an unknown object that presents some properties desired by the designer. Concepts can be partitioned or included, but not searched nor explored.[8]

Building on these premises, C-K theory shows the design process as the result of four operators: C→K, K→C, C→C, K→K.

The process can be synthesized through a design square. One design solution for a first concept C0 will be a path in the C-space that forms a new proposition in K. There may exist several design paths for the same C0. 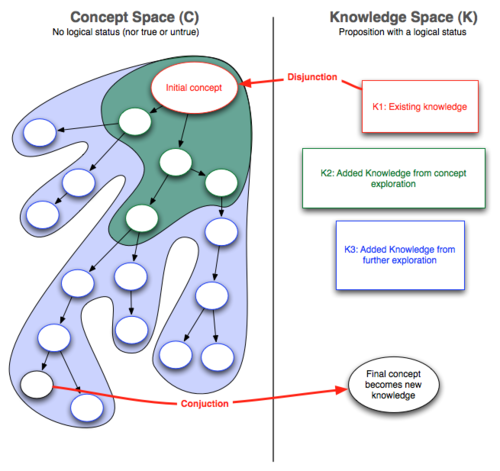 Crazy concepts are concepts that seem absurd as an exploration path in a design process. Both C-K theory and practical applications have shown that crazy concepts can benefit the global design process by adding extra knowledge, not to be used to pursue that "crazy concept" design path, but to be used to further define a more "sensible concept" and lead to its eventual conjunction. The following image is a graphical representation of this process. 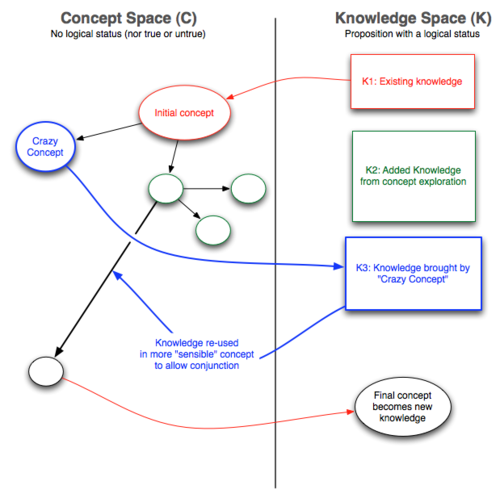 The creative aspect of Design results from two distinct expansions: C-expansions which may be seen as "new ideas", and K-expansions which are necessary to validate these ideas or to expand them towards successful designs.[8]

Domain dependent design theories are built on some specific structure of the K-space, either by assuming that some objects have invariant definitions and properties (like in all engineering fields), or by assuming that the K-space presents some stable structure (e.g. that the functions of an object can be defined independently from its technical realization, as in systematic design theory).

At The Design Society's 2009 International Conference on Engineering Design, an awarded-paper[11] links scientific discovery and design process using C-K theory as a formal framework. It is suggested that a science of design is possible, and complementary to the more traditional bounded rationality.[12][unbalanced opinion?]

Mathematical approaches to design have been developed since the 1960s by scholars such as Christopher Alexander, Hiroyuki Yoshikawa, Dan Braha and Yoram Reich. They tended to model the dynamic co-evolution between design solutions and requirements. Within the field of engineering design, C-K theory opens new modelling directions that explore connections with basic issues in logic and mathematics; these are different from the classic use of scientific models in design. It has been argued[13] that C-K theory has analogies with forcing in set theory, and with intuitionistic mathematics.[14]

C-K theory has been applied in several industrial contexts since 1998, mainly in France, Sweden and Germany. It is generally used as a method that increases the innovative capacity of design and R&D departments.[unbalanced opinion?][citation needed] C-K theory has also inspired new management principles for collaborative innovation, with the aim of overcoming the limitations of standard design management methods.[15][16]